WE WILL MAKE AN OFFENSE DEFEND SIDELINE TO SIDELINE. A lot of coaches say this, but former Texas coordinator Greg Davis means it. He really, really means it. 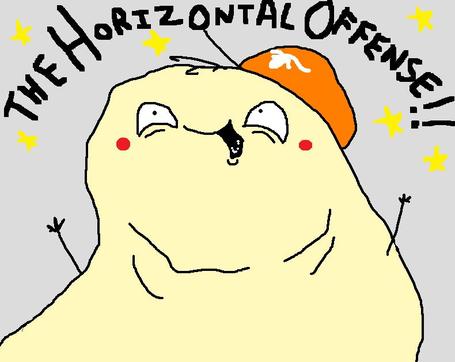 Davis is the rumored frontrunner for the Iowa HC candidate, something making perfect sense because neither Ferentz nor Davis believe in operating an offense without suspenders, a belt, and a pair of pants worn with its own belt and suspenders on beneath it just in case, sir. The state of Iowa is on a desperation drinking watch for the next 24 hours. Be advised, trees that don't want to get shot in backyards from sheer frustration.

ANNOUNCING TODAY: Davonte Neal at 11:00 a.m. You know, now that we're all paying attention in late February. Neal is set to go to one of four schools, with Arizona and Notre Dame being the top two. Either way, watch for Irish fans to crow about their academic reputation in either defeat or victory shortly after the announcement, and then to stammer with fury when you ask "Like Nobel winner Dr. Regis Philbin and Senator Kelly Tripucka?"

REAL BCS QUALITY JAIL. You kind of forget that when this is all over, the "LOL bowl corruption" story of the Fiesta Bowl could end with John Junker going to, you know, REAL-ASS JAIL. Like the kind where they don't let you leave. "Oh, it's just minimum security,' you say. It's still jail: real, live jail where you are a human being under lock and key. In case you wonder whether people will go to prison for anything, the Junker case proves yes, people will go to jail for almost any stupid thing (like a BCS slot, for instance.)

BUT BUT BUT IT'S THE DEFENSES. It very well might be, but having efficiency numbers that much lower than other conferences is just more evidence that the GRRR DEFENSE argument about SEC offenses is partial at best. Our offenses and offensive staffs suck right now, and the margin is the point of debate, not the actual suck.

DAN MCCARNEY IS NOW UNDER THE CARE OF DR. GREY GOOSE. Back at work for an hour a day to start, Dan McCarney is already back at it after suffering a stroke last weekend. The North Texas coach is still recovering, and that's why he's only kicking ass with one half of one foot today, but that's still more than you'll kick in most years.

MORE POINTING AND SUGGESTING PEOPLE WHO WORRY ARE OLD OMG SO OLD. The extra conference game was bad for the SEC--especially guys like Ray Goff and Johnny Majors.