THE PROGRAM FILM CLUB: INTRODUCTIONS ARE IN ORDER

Share All sharing options for: THE PROGRAM FILM CLUB: INTRODUCTIONS ARE IN ORDER 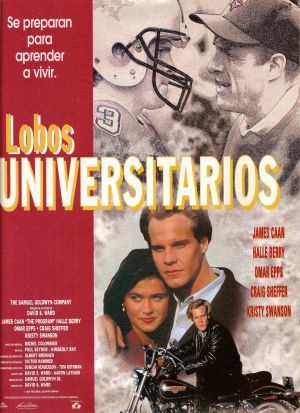 Welcome to THE PROGRAM FILM CLUB, a multi-day EDSBS spectacular where we break down the 1993 film that was too raw and real for the Oscars to handle. We see you, Academy members, cowering in the safe spaces of Schindler's List and The Fugitive. That Best Supporting award for Tommy Lee Jones is film history's ugliest blemish, sirs and madams.

Before we dive into the film, let's look at the hardworking people who made this cinematic symphony come together: 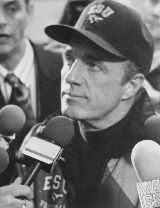 Run Home Jack: Did you know that James Caan played football at Michigan State? Did you know that means we all screwed up by failing to make a GIF of Sparty Corleone getting shot up at the toll booth by the Pelini Brothers? Those are 100% Certified Internet Facts. Caan plays Sam Winters, the long-tenured head coach of the Eastern State University Timberwolves, a team that serves as a proxy for every football program struggling to find the balance between success and integrity so, no, we're not talking about you, Kansas.

Orson: James Caan receives top billing in this film because Sam Winters is the emotional center of the film, a coach whose need to succeed is complicated by the sometimes unethical things he must do to achieve that success. But why say this in our own inferior words when IMDB describes the character of "Sam Winters" so much better than we can?

Sam Winters' most enduring emotional traits are his and his . Caan lets us into the soul of Winters as only master actors can. Each shrug reminds us of Winters' and his inability to . The story of Joe Kane clearly affects Winters, whose struggles with are disclosed as Caan . When Caan says his memorable line " ," we know this is about more than football. His absence is his presence in The Program, and that presence is in every scene, especially the ones he's in shrugging as he walks away from the camera.

In summary, this is the finest depiction of Dennis Erickson ever captured, and Caan's best work done between Honeymoon In Vegas and Flesh and Bone. (Note: this is the only film Caan made between these two films.) 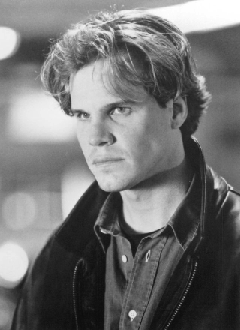 Run Home Jack: Sheffer was 33 when The Program came out in theaters, which may explain why he frequently seems WAY too old to be playing junior quarterback and Heisman hopeful Joe Kane. Will there be puns based on Joe Kane's name? Of course not; this was the early 1990s, a simpler and more wholesome times. #GetKanedInSingapore #DoctorFrasierKane #TheRainInSpainFallsMainlyOnTheKanes

Orson: Joe Kane is allegedly tortured by his fatherless and impoverished past, and that is how you know he is a fictional character. Real fatherless redneck trash quarterbacks are a rolling festivity, forever drunkenly crashing scooters into the team bus and urinating in the back of "FOOD FOR FOODS AND ATHLETES 202." Joe Kane is going to mope, drink beer, get sacked until his ribs turn to powder, and curse the day God gave him Craig Sheffer's massive cromag forehead. Think Jay Cutler with acromegaly. 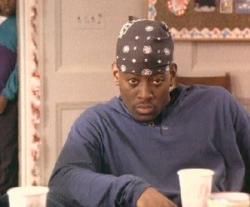 Run Home Jack: Between The Program, Higher Learning, Juice, and the ABC Afterschool Special In The Shadow of Love: A Teen AIDS Story, Omar Epps pretty much owned the first half of the 1990s. As true freshman running back Darnell Jefferson, Epps has to do two things on the field: be fast and talk shit. Darnell Jefferson would be extremely effective in an Urban Meyer offense, which is all about getting the ball to fast guys in space so they have plenty of time to talk shit.

Orson: RHJ is correct: not only does Darnell's shit-talking tininess make him a prototypical Urban Meyer recruit, but his ability to start fights with teammates makes him an honorary member of Urban Meyer's disastrous 2008 recruiting class. Speaking of transferring: Jefferson will first transfer to Life Experiment Period U, setting for Higher Learning. Despite watching Tyra Banks shot in front of him, he will confer with 2012 Jefferson, who assure him that Tyra Banks getting shot in 2012 is much funnier than he could possibly imagine. He later becomes a doctor who has sex with Olivia Wilde and also assumes the redundant title of King of Earth. 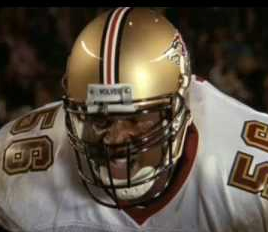 Run Home Jack: Alvin Mack is ESU's NFL-quality linebacker. Duane Davis played at Mizzou and is the son of an NFL Hall of Famer. What I'm trying to say is that sometimes being a casting director is just easy as shit. Mack is the character who doesn't give a shit about classes or accepting illegal gifts from boosters because once he makes it to the pros he's gonna buy his momma that nice house and this can't possibly end poorly why are you worrying so much?

Orson: Alvin Mack is basically Patrick Willis with a happy life story. It is suggested that Alvin Mack's backstory is horrendous. This is still a happier version of a bio than Patrick Willis' real life. Also an important fact: his knee is made of macrame paper, and his playing at Mizzou was the entire reason Mike Slive offered a membership to the Tigers. FUN FACT: Is the only actor who starred in The Program AND Necessary Roughness. 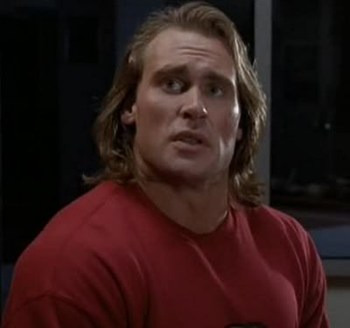 Orson: The best anti-steroid message of its time would not have been possible without Lattimer looking swole as fuck, doing a thousand reps of the shoulder press at 185 and looking like a god in sweatshorts, and then playing really well and making all of his dreams come true before deciding not to to steroids and ruining everything. Sold on staying clean, guys! Also, steroids are apparently some kind of crazy cocaine/PCP mix in this film, and make people act like brain-damaged mongooses. What you need to know from Lattimer is that steroids are awesome, and not doing them is a bad idea. 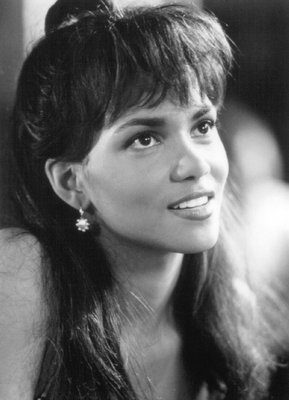 Run Home Jack: Three things you need to know about Halle Berry's character. One: she is all about academics, so you need to understand that just being a talented football player is not going to get it done. Two: her entire wardrobe was stolen by an enterprising costume assistant who snuck onto the set of A Different World. Three: Do not cheat on her with a white girl. Just don't.

Orson: Halle Berry's bangs were inspired by Phoebe Cates in Fast Times At Ridgemont High. Her fight trainer was Wesley Snipes. Later she will have sex with Billy Bob Thornton on camera and win an award for it because, well, yeah, that should get you some kind of award for bravery. 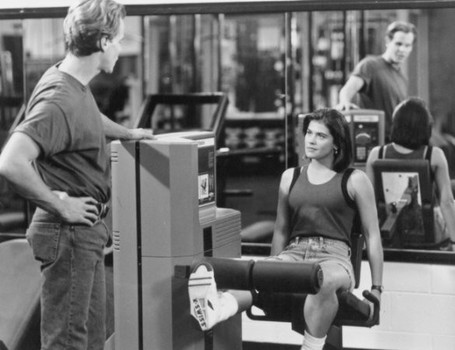 Run Home Jack: Look at that picture. I know it's in black and white, but do you see what Kristy Swanson is wearing in the Cybex Jungle? JORTS. Let me repeat: Kristy Swanson plays a scholarship tennis player who works out in jolts, and in 1993 that was one of the sexiest sentences you could have written.

Orson: We do not know this from the film, as it is not mentioned in the dialogue. However, you can safely assume having a relationship with Craig Sheffer was an extra credit activity for her primate anthropology class, because Craig Sheffer is an ape. His admission into school can also be implied to meant that ESU is modeled on Auburn. "DELETED SCENE: A drunk, weepy Kane throws feces at the university's wolf statue, yells 'ALL-IN.'"

Run Home Jack: "Hello, Mr. Hollywood Studio Producer? I would like to offer my services as a screenwriter and director for a film I've envisioned which exposes the darkest and most troubling aspects of college football. Academic fraud, disregard for player welfare, improper gifts from seedy boosters, drug and alcohol abuse - it's all in there. We're going to make a film that is brutally honest and powerful."

"That sounds amazing! Tell me, what was the last film you wrote and directed?"

Tomorrow: Part one of the light-hearted tale of the Russian Revolution, The Program, will be analyzed by your EDSBS Staff.