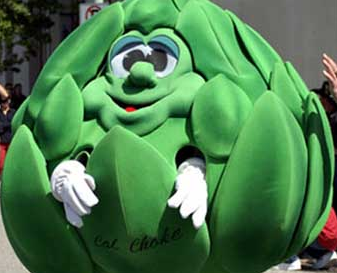 That fine piece of mascot terror is the Fighting Artichoke of Scottsdale Community College, just one of the cast of bizarre mascots Holly rustled together for the Fruit and Vegetable Mascot Power Rankings over on Campus Union. (Like artichokes, most things in Scottsdale are expensive and tasteless, so it's really only appropriate.) The thing you did not know: the Syracuse mascot could have been many things, but most importantly it could have been a Pilgrim shot full of arrows, and DAMMIT WHY NOT, SYRACUSE? ARE YOU AFRAID OF AWESOME THINGS?

MARDI GRAS SEEMS TO BE STAYING RELEVANT WITH IMPORTANT COLLEGE FOOTBALL STORYLINES ILLUSTRATED IN A FESTIVE MANNER. If your friend in Louisiana or along the Gulf Coast has not returned your phone calls for some time, it is because you have rudely forgotten that this is Mardi Gras time and expect them to do anything but all the things Mardi Gras entails: drinking, eating, drinking, more eating, staging elaborate parades, throwing beads, drinking, and then making sure to work in relevant college football storylines into float design. The sad Jarrett Lee figure pleading for a chance is full of an almost unbearable pathos.

DON'T CONFUSE THE CROWN FOR THE NATION. We have no doubt that SEC schedule might mean things like not getting Florida/Tennessee on CBS in week three, but if we're all honest (and in our case, giddily so) the Florida/Tennessee game isn't a rivalry on the field anymore. (In our hearts, forever; by the numbers, not for twenty years or more.) And assuming the identity of the SEC will be changed forever by expansion is correct, though not the potential disaster Blutarsky hints about here.

Apocalypse is always the easiest prediction since it's the one that's always eventually right--in the long run, the SEC is dead like the rest of us--but changing the schedule around won't change a lot of basics that make the SEC work as a league. (I.e the SEC being rednecks overly devoted to the athletic endeavors of 18-22 year olds, warm weather, and a huge pool of talented players dying to sign whatever to play.) The league office can't change that at anything but the margins, which is what the schedule change ultimately will likely be in terms of effect: marginal.

We don't know that for sure, and no one does, but ultimately that's what we think will happen: a whole lot of heap-nothing. The part no one's sure about is Mizzou, and shit, we don't know if they're going to work, either. But it could very well work out just fine. This is a league with South Carolina, Vandy, Kentucky, and two Mississippis in the historical ranks. While those schools may be just fine at given points, the overall trend has not been pretty for any of them. Yet we love the cannon fodder because they're "ours," a very flexible term that at one point included established football aliens Georgia Tech.

The only thing expansion's messed with is identity, which happens to be a very malleable concept, brand-wise. On the good side, this just adds strength to the SEC-Borg, and on the worst possible downside it adds too much to the menu and turns us into the Hardee's of football leagues. Hardee's is still pretty damn tasty, even if you don't want to admit it. (We see that wrapper on your car seat. You can't hide, Hardee's lovers.)

ANOTHER SEC SCHEDULING EVIL. Arkansas to play A&M at Kyle Field this season instead of in the inhuman gargantuan penis-cap of the JerryDome. See, it's not all hell-rain and flames, old guys.

WE DON'T WANT TO BE THE SEC. "Um, wait, you sure about that?" says influential Big Ten coach with cyborg heart. Quote of interest one:

A: I went to Oregon. (Coach Chip Kelly) is a friend of mine. He’s bizarre, very bizarre.

No. I think there are some new coaches in this league, one is at our rival school (Michigan’s Brady Hoke), who go recruit. A comment was made by one of the coaches in our league, I won’t say who it was, but he said, "There’s a rulebook and a signing date. Go recruit. Follow the rules and they sign on the first Wednesday in February." The Big Ten is no different than the SEC; they better not be. I heard a comment about, "We don’t want to be a certain conference (SEC)." You don’t?

"Not at all," says Joe Tiller, sipping on a lemonade in his boxers, a pair of rubber boots, and a heavy coat, most likely while casting a fishing line in his front yard and not having to deal with the Big Ten's impending loss of identity, either.

HAHAHAHAHAHA. Convicted felon, former head of a BCS bowl, whatever. Like that's supposed to make the BCS not seem MORE appealing at this point.

BELLE OF THE BALL. The term describes Maryland transfers, but not their coach. (And if you don't like Gregggg, at least credit the man for a fine filet job on Edsall. It's a specialty.)

ETC: If you did not see it, your obituary will not be this cool. Cocaine bear was a little more reckless in the 1980s. The answer to this is totally Phillip Rivers, since abstinence means doing some pretty extreme things to stay level. Working in Japan is fun, especially when you have to leave in a day fearing for your life.