Share All sharing options for: THE PROGRAM FILM CLUB COMMENCES NEXT WEEK 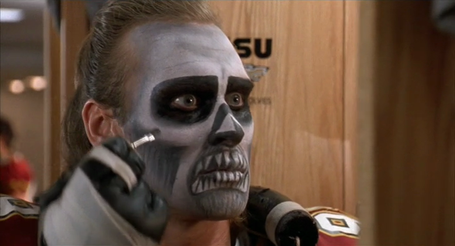 Am I now the girl you always wanted, Mommy? AM I NOW?

There is a little bit of news this otherwise eventless Friday afternoon. Mike Leach's wrongful lawsuit against Texas Tech was dismissed in Texas, ending just one pointy end of Leach's many pronged-legal trident thrown at his former employer, ESPN, and Craig James. Leach's angry gorilla attorneys will have to find a way around Texas' "sovereign immunity" clause concerning litigation against state entities, and that will be difficult given the nature of any "sovereign" claim in a legal code.

Important note: Texas "sovereign immunity" claim is totally fine with us as long as Texas has an actual king. That king should be Willie Nelson, Bun B, Al Jourgensen. The Vice-Chancellor who secretly runs everything will be Robert Earl Keen. Your choice, Texas.

There's also this: next week, Run Home Jack and ourselves will be hosting an all-too extensive discussion of the classic film The Program. It is not the finest film about college football ever made, but it is our favorite, and the distinction between the two should be made very clear. It is not that we believe the moment that Andrew Bryniarski, playing the trouble Steve Lattimer, runs his head through a car window is the finest acting ever done. It's that we know it is. The Program is the finest movie ever made, and there will be no objections to the contrary.

Please enjoy your weekend, and attack it with the zeal of Alvin Mack reviewing film assignments.

Coach Winters: Alright, this is Mississippi State's offensive set. Second and two on our own 24, what defensive set might we call?

Alvin Mack: Eagle Zipper Hero, unless the setback shifts into the I.

Coach Winters: [clicks to next slide]

Coach Winters: [clicks to next slide]

Kill everybody. Have a good weekend. And by all means, earn that place at the table.