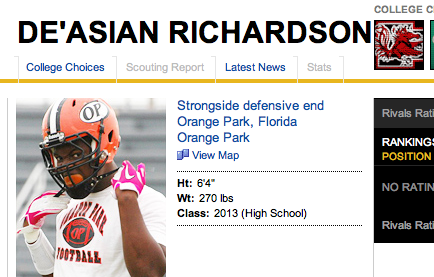 You like how you start laughing at the name, and then the pic is like OH NO NOT LAUGHING AT YOU, 6'4" 270 LB MANCHILD. NOPE. IT'S COOL, BRO. In case you don't get the menace, here's a picture of him with his friend Steve. You go ahead and laugh at that name. You go right ahead, meat. (Via SBN Recruiting.)

THAT WAS NICE WHILE IT LASTED. We were really looking forward to having two tight ends this fall, but AC Leonard's lack of conflict resolution skills may have just ended that sweet hallucination of potential Ace 2-tight beauty. We don't know the circumstances, of course, and reports are preliminary, but we're sure there's a perfectly reasonable explanation for a 260 lb tight end getting into a fight with a woman.*

OMG THE THREE PEOPLE OUTRAGED ABOUT THIS ARE PROBABLY MAD ABOUT THE KIDS AND THE LIBERALS/CONSERVATIVES AND THAT STOP SIGN WE DON'T NEED ON THE PUBLIC ROAD. Tee Martin, by all accounts a rising talent as a recruiter who also happens to be the only quarterback in modern Tennessee history with a national title, is now coaching for Lane Kiffin because labor markets in a fluid capitalist economy mean one can change jobs at will. The real point of this post is that Duchess Peyton Manning never won a national title at Tennessee, and that Tee Martin, Al Wilson, and the immortal Raynoch Thompson did, and also that Tennessee fans are boot-licking peasants. (This is the point of many posts here.)

THE DELIGHTFULLY SIMPLE NUMBERS GAME THAT CAN GIVE YOU A NATIONAL TITLE. All you need is a quarterback who can make bad math for a defense. This is a review for any of you who've watched a spread option roaring along at full speed, but it's good breakdown nonetheless save for the omission of the detail that Urban Meyer secretly hates every running back he's ever met, and will never be happy with any of them ever.

WHAT A DEAL. Of course you'd pay $350 for a slice of Mountain West history! Or not!

MONTEL HARRIS IS CLEARED FOR TAKEOFF. And that is delightful for Boston College, because their quarterback is a hat rack with a special attachment for holding a football.

BO LAB. Boy, does this Catlab production take a graphic turn halfway through the video. You have been warned.