AN EDSBS PSA: IT'S NOT NICE TO IMPRISON QUARTERBACKS

Share All sharing options for: AN EDSBS PSA: IT'S NOT NICE TO IMPRISON QUARTERBACKS 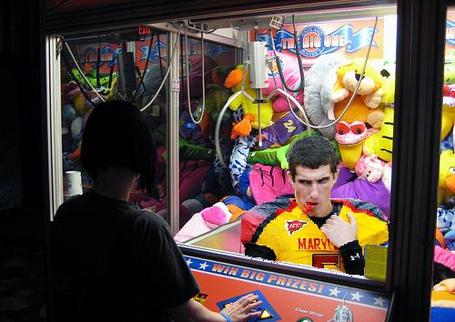 If you have a quarterback-imprisonment problem, reach out. Ask for help. No one is demonizing you. We want to help you. We know the thrill of telling someone they cannot live in Nashville. It's one of the best things you can do, really, and completely in their own interests even if you are deluding yourself into thinking it is not.

But if you love something, you need to set it free, even if Mike Locksley wants another dollar for the Danny O'Brien machine. He might say he'll hit you if you don't give him another dollar, but he's kidding. We think. Give him a dollar. It's just a dollar! GIve it to him now. He looks serious. He's punching us as we type. Give him a goddamn dollar right now.