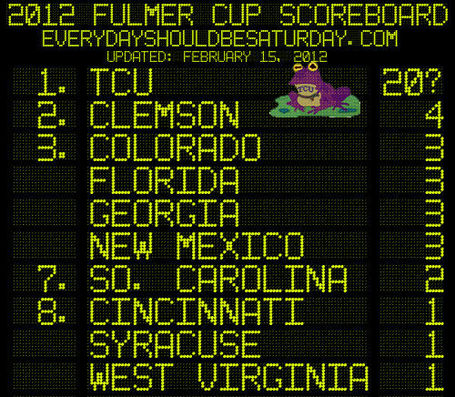 This morning 17 TCU students were arrested in a drug sweep resulting from a six-month investigation by the TCU and Fort Worth Police Departments. Of those 17, four were football players: Tanner Brock, the leading tackler from the 2010 team, defensive lineman D.J. Yendrey, offensive lineman Ty Horn, and cornerback Devin Johnson. All four have been expelled and removed from the football team, but were all on the football team at the time of their arrest. These crimes are therefore all eligible for the Fulmer Cup. The awarding of points shall begin.

The score above is provisional sum because so far we only have two of the affidavits filed in the case. Those two are Tanner Brock and D.J. Yendrey's, but they are more than enough by themselves to guarantee a substantial lead in the Fulmer Cup 2012. We'll update when we get the others, but do note one very ominous sentence in this case: "Fort Worth police said the investigation is ongoing and that more students could be arrested." This number will change, most likely in the upward direction. In the meantime we will tally conservatively using what we have.

Tanner Brock had three felony delivery charges of greater than one ounce and less than five pounds. (His picture in the affidavit is taken straight from the TCU football team's website, and this is not a good thing.) He made these himself to undercover officers on three separate occasions, something you can learn from reading through the accounts yourself.

The wonders of online documentation also mean you can read this fascinating interaction between Brock and an undercover agent after the topic of a TCU drug test came up in conversation.

That's a higher ratio than the alleged two-thirds of the 2006 Florida national title game, the gold standard for pervasive marijuana use. Note that this could be other things besides marijuana, however, as the original story mentioned "marijuana, cocaine, acid, ecstacy and prescription drugs."

Yendrey's affidavit features five misdemeanor delivery charges and one felony delivery charge. It's nowhere near as interesting, though if you do the math you'll find that Yendrey's not exactly the best at converting his metrics to imperials in the weight game. THAT'LL GET YOU WAXED DAWG DON'T TRY THAT ROUND HERE. Also, $190 for a half is some "rich Dallas suburb markup," per an anonymous source in the EDSBS community. Expensive and poorly measured sounds just about right for a DFW deal of any sort.

The other two players involved, Horn and Johnson, do not have their charges posted publicly yet. Three of the four players are charged with selling hydroponic marijuana, though, so at least one of the others probably has similar charges. At the very least, we'll give a placeholder point to either to note that they're charged with something.

Brock's three felonies at three points each takes us to nine. Yendrey's five single misdemeanors gives us five, and the felony is another three. Eight total for him brings the tally up to seventeen. Add in one bonus point at least on principle and the two others placeholders, and we're looking at 20 points minimum for TCU in the Fulmer Cup.

While his is not Auburn 2011, there are some very loose ends and extenuating circumstances. The DA in this case did not elect to bring the hammer of the gods down on these players like the Lee County DA did in the Auburn home invasion case. Additionally, that dangling "more arrests" note means this could be far from done, especially if they're looking into other football players. (Never forget the dazzle of a high-profile case for those pressing the charges.)