HEY LOOK IT'S THE SEC SCHEDULE. THE RABBIT IS YOUR SOUL. 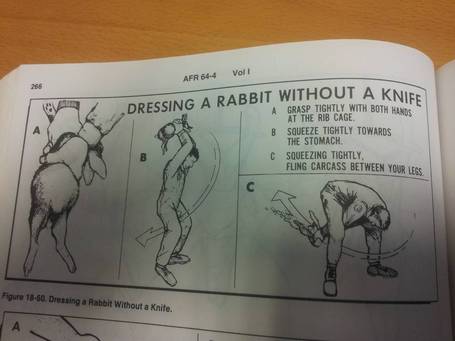 We kid. The SEC schedule will come out a week after the 2012 season actually starts. The Big 12 schedule, however, came out yesterday, and as always it is backloaded as hell and full of late fall drama. The obvious candy? West Virginia at Oklahoma State on November 10th should be six hours long and full of flames and screaming, so we are all for this new thing already.

THIS IS GOING TO GET SOMEONE'S PARTNER SHOT AND A GUY'S ALREADY WOUNDED HEART COMPLETELY BROKEN BY A GIMLET-EYED GAL WITH A BODY LIKE A JAGUAR AND A MOTOR TO MATCH. If the NCAA is going to start using private investigators to follow up on cases, then someone's getting shot in the state of Alabama, and then we're going to have to listen to Finebaum callers defend it, and sure, let's go ahead and do this.

DEREK DOOLEY SHOULD STOP TALKING PART 129. Sure, oversigning's great, Derek. It's like the best.

WAC TO THE FUTURE WELL NOT AT ALL. Karl Benson's tiny universe now expands ever-so-slightly, while the WAC has passed Red Giant stage and is well on its way to total collapse with the Mountin' USA Giant Frog Sex Ball conference forming from the remnants of three different conferences. The Sun Belt is now the Alt Football Conference, containing the mainstream coaches of tomorrow working in obscure, affordable towns where an artist can really just do his thing, you know?

MIKE HAMILTON IS HELPING WITH INTERNATIONAL RELIEF. No, really, that's what he's doing. We have no jokes for this other than to say this is awesome, and that he might be having this conversation with the small African child in the picture.

THE MOST IMPORTANT THING YOU WILL READ TODAY. The Rottweiler at defensive end is a great call, though the Golden at QB is a tragic misstep due to lack of field smarts. We'll take a standard poodle there: smart, quick, tough, and like most QBs known for silly hair. (More necessary dogness here.)