AN INTERCEPTION'S NOT A LOVE CRIME WHEN DENARD ROBINSON'S THE BENEFACTOR

Share All sharing options for: AN INTERCEPTION'S NOT A LOVE CRIME WHEN DENARD ROBINSON'S THE BENEFACTOR

Valentine's Day. The one day of the year when every half assed, disappointing excuse for a romantic partner can try to dig deep and make their eleventh hour improvisation not look like one of so many Denard Robinson throws on the run. Sure, maybe those three defensive backs will be there waiting from the wounded duck floating from the heavens above. But maybe, just maybe, that one forgettable, generic Michigan wide receiver will come down with it and then go 40 yards after the catch to turn a wing-and-a-prayer into six points. And of course by six points, we mean sex points.

One such loyal Michigan man has pissed all sense of self awareness to the wind and proclaimed to the Shoelaceless one and all of us in its wake that he's not embarrassed that he's listened to nothing but queefcore for the better part of the past twenty years. Hell, it's the only thing keeping Brian Griese young.

We salute you loyal master of the Mitten. Rob Thomas vanity license plate covers are practically a currency in most parts of the state. That's not to say you (and we) can't do better:

(Hit play for maximum effect as you read along.)

Denard... I know you think just cause I'm not taking over your twitter account that that doesn't mean we've got something special here.

Look, I would full on identity theft your fleet of foot ass if I thought that meant what we have we could have forever.

I keep even slipping Al Borges that drug from "Limitless" just so he doesn't try to make you run a true West Coast offense.

But that doesn't mean I can't tell you how special you are to me.

You see, every time you move that arm back and that short choppy awkward motion comes to fruition, my heart skips a beat.

Sure it might be from sheer trepidation that the ball is going to the opposing team again, but I think it means so much more.

And maybe, just maybe, that thing we share being the worst eleven win BCS bowl winning team in college football history who probably benefitted from playing a Virginia Tech team who had no business even making that type of game might not seem special to some people, but it's the perfect foundation for what we've got, Denard.

Denard, I'll even order Domino's anytime you need it.

I won't even use Dave Brandon's discount; that's how special you are to me.

And sure that might make it an NCAA violation but it would be a violation not to, Denard.

What we've got transcends rules.

Every time I see a football wobbling towards uncertain hands in the wind, all I can hear is... D-E-N-A-R-D

In the off chance that doesn't do it for you, there's always the more obvious strategy:

I get so excited

I try but I can't fight it

Fling it with your elbow

(You know what you're doing, don't you)

You're making it Denard for me 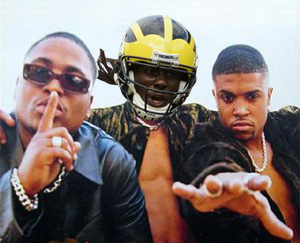 The whisper gesture in a crew of 3 bros is never not, well, kinda rapey.