KIND OF WANT EVERY FLORIDA FAN DOING THIS TO JUMP FACEFIRST INTO AN UNSEALED NUCLEAR REACTOR CORE. 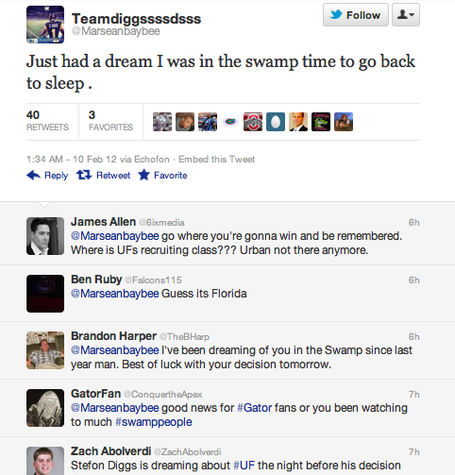 Diggs is trolling everyone hard this morning--and in his position, why not--but the five-star wideout, the most pursued of the post-signing day recruits out there, is rumored to be opting for Maryland. He is from the area, and Mike Locksley is involved, so we assume that's enough explanation for everyone since, um, "Mike Locksley."

He announces at six p.m. from Looney's, where Randy Edsall does his radio show. For the MD fan who attends, and then announces "I'm transferring to another bar" mid-announcement, we will have one beer waiting for you at a future unspecified date.

SO THAT MAY BE DONE. Premature web welcomes aside, the West Virginia/Big East feud may be nearing a cash-splashed ending. The $20 million settlement allowing the Mountaineers to play in the Big 12 in 2012 will come from two sources: $11 million from WVU, and $9 million from the Big 12 itself to spring WVU from its current marriage. This was broken by Brett McMurphy, whose subdermal microphone implants on John Marinatto, while disturbing in his most personal moments, have certainly yielded some serious stories this year. Well struck.

YOUR MORNING JAMES FRANKLIN. We have now decided to delight in James Franklin's extremely emotional public self, and in other coaches getting to look all cuddly in comparison while still leaving open the theft of recruits from verbal commits. (They're right, but the double play is delicious to watch.)

COFFEE-SPATTERED KIRK FERENTZ. This does seem like a likely scenario for Iowa and their offensive coordinator position. It will end with an axe, the way many things in Iowa disputes end, but thank heavens for all those rivers because they tell no secrets. Meanwhile, Ken O'Keefe is doing just fine in his new job with the Dolphins.

RIP RAMESES. The UNC mascot had his allotted 8 ram-years on this planet, and then passed away after his bloody reign as the Tarheels mascot. He will be remembered as a ram, with horns, and lanolin and fur and things, and also as a patricidaire. The ill-fated history of the UNC mascot taken into account, not a bad ending for him, really.

LOOKING SPIFFY. The new Barking Carnival and their outstanding commentariat is on the SBN system now, and looking quite sexy. Friends can say that. No, we're not taking our hand off your leg. It's there. Deal with it.

GO BLUE. Unfortunate in so many ways.

ETC: Ricky Williams and negative capability make for far more Keatsian reading on Ricky than you thought possible. Pullman is awesome. "Really evaluate where your strengths and weaknesses are. Be honest." Joan would have been a fine head coach. Got another one in you?