SPIRITS OF THE CARQUEST BOWL, GUIDE ME! 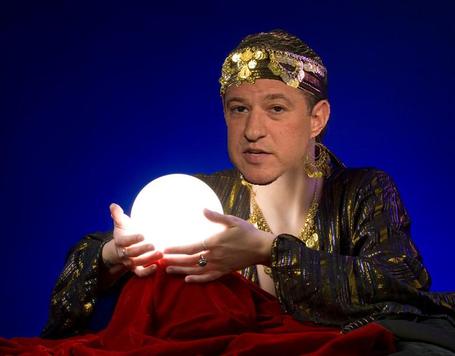 Reports from signing day, as seen only in dis crystal ball blackberry! SHUMM-ONN.

Great signing day for Florida State. Would not be surprised if this group wins multiple titles - Rix really is that good.

After playing "Revolution 9" from popular band The Beatles' "White Album" backwards, it appears that athlete Paul Thompson from Leander's chances of going to Oklahoma State or Texas… Are dead.

According to my elderly neighbor, this Dikembe Mutombo is a defensive monster. Great get for the [CONFIRM WITH RESEARCH DEPARTMENT].

A man dressed entirely in silver glitter body paint doing what appeared to be the robot would neither confirm nor deny rumors of LSU's Les Miles being in on quarterback Russell Shepard.

Seantrel Henderson may be just the commit to save turn around Tim Brewster's Minnesota tenure.

A reliable source at the University of Southern California tells me LSU fans might want to hold their horses on all these "Joe McKnight-to-Baton Rouge" rumors.

An anonymous internet source has emailed me to let me know that little-known Messi Facial may not have the buzz other recruits do, but that he's a corner whose coverage and explosion will be the talk of the Big East for years to come.

Vincent Young, an athlete from the Houston area, has committed to stay at home with the University of Texas. Will he stay at QB? Time will tell.

Popular internet web forum TigerDroppings reports "The page cannot be found. The page you are looking for might have been removed, had its name changed, or is temporarily unavailable." The SEC's clandestine ways know no bounds.

Can one signing put Tennessee back on top? This DVD of Bryce Brown I bought at a garage sale says YES!

I'm told by a man very familiar with the solar system that if the sun and moon both align a certain way at a certain time, Florida commit John Brantley turns into a teen wolf.

I have just received this email from Colorado coach Gary Barnett: "NOTICE DO NOT REPLY THIS EMAIL DOES NOT EXIST" Pretty big day there in Boulder.

Hearing Bo Jackson turned down legendary Alabama head coach Bear Bryant. The reasons are unclear but one source didn't like the sound of it.

Whispers around Clemson say CJ Spiller's commitment may be in jeopardy after doctors examinations revealed Spiller IS REALLY A VERY MUSCULAR GIRL.

BE BLESSED MON! MISS CLEE-JOE MAY NOT KNOW DEE WHOLE FUTURE, BUT HE DOES KNOW IT WILL SOON BE "PAST" US IF WE'RE NOT PRESENT, MON!