BARRY-APPROVED. First, cheers to Barry Switzer this morning. You can say this any morning, but shit, why not? 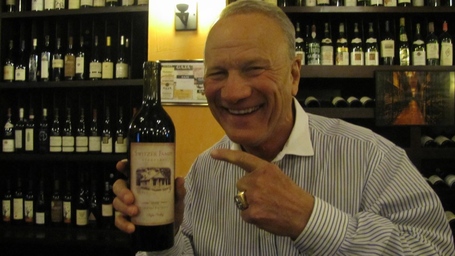 These quotes are deeply unsourced, but if we're talking about Barry Switzer, it really doesn't matter. Re: Bret Bielema.

The first thing I heard today was that he grew up on a pig farm. That's quite a start in my book. And my last memory was watching him hang 70 on Nebraska. Just those two facts are enough. Then, I hear that he's out of the Hayden Fry-Bill Snyder-Barry Alvarez coaching tree. Oh, that's enough for me to like a lot. Then, I hear he's got a 27-year-old wife. Okay, we can stop. I like him.

You'll read this in Barry Switzer's voice, which will become George W. Bush's voice, and that's fine because they're really, really close to being the same. This happened, and was strange.

THE ONLY PICTURE YOU NEED TODAY. THE PURDUE PRESS CORPS(E) IS SO THRILLED ABOUT ALL OF THIS.

CHARLIE STRONG IS OUR HERO. Charlie Strong did turn down the Vols, leading to "turns down Tennessee" being the leading Twitter search term last night for a brief hilarious moment. Tennessee now has to chase Larry Fedora with their pants down and weeping, or else fall into the trap of the midnight coaching booty call. That booty call. Oh yeah, girl. You know you'll hit those digits.

PER RIVALS.COM: "HURR OF COURSE BERKLEY WOULD HIRE SOMEONE WITH THAT LAST NAME HURRR." Now that we've pre-empted the horrendous joke someone will make on a Rivals message board, Cal did hire Sonny Dykes, who with something like $500 and happy thoughts got Louisiana Tech into the national spotlight. No word on if he takes Tony Franklin with him, but if he does Franklin's growing his hair long, buying a weed dispensary, and then selling a detailed business plan to others interested in doing the same.

GET YOUR Y-CROSS GAME STRAIGHT. One of college football's most magnificent pass plays illustrated by the master himself, Captain Combover, Hal Mumme.