LANCE GUIDRY IS YELLING AND WILL CONTINUE YELLING FOR THE DURATION

LANE KIFFIN WILL SHOW UP WHEN HE DAMN PLEASES. Last night's Sun Bowl dinner had plenty of elbow room and leftovers thanks to USC showing up 90 minutes late. Lane Kiffin has angered Paul Johnson, and that usually ends with never mind you'll have 600 yards offense against him because emotions are not defenses. 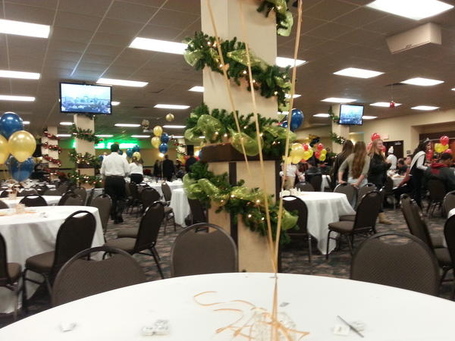 LANCE GUIDRY'S BALLS ARE SOMETHING TO TRIP OVER. Central Michigan pulls the second upset of the bowl season, beating WKU despite being "one of the worst bowl teams ever" according to influential internet people who know what they're talking about. Lance Guidry was talked into going for a 4th and 2 despite being in position to take a tying field goal at the end, and fuck it, it's the Pizza Bowl, man. You let Lance Guidry be the cool dad who the kids talked into trying to power slide the minivan. (That parking lot telephone pole had it coming.) Zero damns given, indeed.

FIU, STAR PUPILS. Bill C does not like that firing, sirs.

FAREWELL, VEGAN VIKING. Matt Patchan, the kosher vegan viking lineman who was both shot in the back as a freshman and injured in a scooter accident, will be transferring to Ohio State to be with his old coaches, and also to hopefully escape the bizarre injury bug that has cursed his time in Gainesville. Au revoir, bearded angel.

ETC: Oleg the Prophet seemed pretty awesome. This is really the finest scene from Team America that you can watch at work. Collin Klein, decent human.