HAPPY HOLIDAYS, OR A LAWYER DESTROYS A TELEVISION

Share All sharing options for: HAPPY HOLIDAYS, OR A LAWYER DESTROYS A TELEVISION

"Rick" is the EDSBS attorney-of-record. He also wants to share a story about last night, when he celebrated the holiday season by throwing a controller through his $800 plasma TV. Enjoy.

Hello internet, my name is Rick (my name is not Rick). I am 36 years old, have multiple degrees of various respectability, am a soon-to-be-father, and have been compared in appearance to a "high-carb Owen Wilson". I am a perfectly adequate height, but was asked recently but a five year old how tall I will be when I grow up.

Use this to complete the scene of last night, when, drunk and shirtless, I threw my Xbox 360 controller through the screen of an $800 plasma. 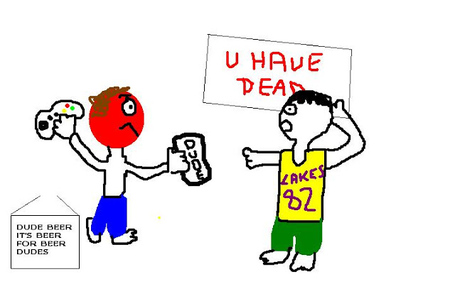 Not a photograph. (Illustration by Run Home Jack)

It was late for a work night, maybe 10:30am; too late to be three glasses into St. Remy cognac at any rate. Not Remy Martin, mind you, but it’s more affordable cousin.

I was alternating games of Black Ops II with my exchange student from Beijing, named Hung Long. His name really is Hung Long. Imagine his delight when I told him what that means in slang. "Fuck your grandfather!" he breathed in amazement.

Why not simply play split-screen? That’s part of the problem.

I suck at Black Ops II. I suck so fucking bad that my friends and neighbors have come to watch me play and offer hints and tips. One of the tips was "don’t play split screen, you miss campers, maybe because they’re too small. Do you need glasses?"

I don’t need glasses. But, ok, no split screen. So we take (took) turns on the main screen.

"Don’t fire until you can hit them, otherwise they see you on the map. And don’t use the machine gun," my friend Dustin had supplied. Alright, got it.

"Why the fuck are you using the crossbow? Don’t ever use that. Use the shotgun." His brother Nick had appended. Right, shotgun.

"Why are you to be suck? Dude. Fuck. Fuck, dude," Hung added. This was less helpful, but last night he went further. "Stand up, right in TV. Right here." He pointed to a spot on the floor, maybe four feet from the 36 inch screen.

This was about two hours, and the above-mentioned three drained glasses, into a most suck-tacular video game death-fest. I had killed no more than three people per game, died no less than fifteen times each, and seemed to have a special magnetism for all manner of airborne destruction.

I had taken my Think Geek "The Dice Are Trying to Kill Me" t-shirt off a few games ago. The thick cotton impeded my reaction times, I felt. Hung made no comment. He only wears knock-off Lakers gear anyway, like the vending machine clothing from Idiocracy.

I was going to have one fucking game with more kills than deaths. One. Then slumber.

"Stand here," he said. So I did. Weapon selection: some kind of assault rifle, crossbow (I like it), grenades, flash-bangs x2. I was fury incarnate.

The gamestate clears, and the map is selected. I smile. I know this map. I know where to hide, where to run. I can do this. Is it hot in here?

"TEAM DEATHMATCH!" the narrator grumbles. He has a voice like iron on gravel.

The screen becomes splattered with my blood almost instantly. What the fuck? How could I die already? The death reply shows a lucky far-flung grenade. That’s ok, it happens. Respawn.

Death. Death. Death. Bullets and bombs rain down like Apollo’s arrows at Troy, covering my troops like dusk at the end of the day. The narrator exhausts himself reciting my enemies’ horsemen of Hell. "Hostile UAV incoming…hostile RCXD in your AO…hostile Hellfire incoming…hostile EVERYFUCKINGTHING…"

I’m convinced that my internet had tremendous lag. And that one fucking guy has haxx. And everytime I find someone (most of the time I wander on an empty field, no enemy to be seen) the server migrates. Life is pain. The game is almost over.

Then I get knifed.

"Fuck my ass Rick you suck," spits one of my teammates.

That’s it. I lose my shit. I whirl the white controller overhead and release it underhand like a fast-pitch softball, less than four feet from the television. 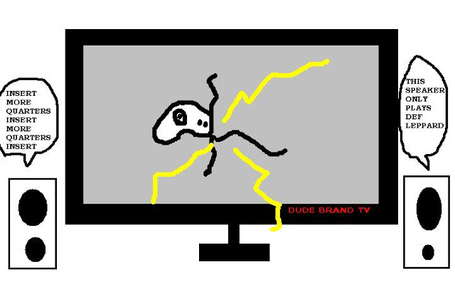 Why not overhand? Why not a more manly and cinematic throw? I don’t know.

It hit the screen with a soft retort. A lightning storm of cracks spreads across the plastic from right to left. Inside the cracks white sparks glimmer. The screen goes dark.

Hung stares at me. "Fuck dude…"

I’m ashamed, sweaty, shirtless, drunk. I’m down one controller and have destroyed my only television. I swear to Crom I will never play this fucking game again. I won’t even trade it in and have its taint spread to another disc. I will break it into silvery shards and make them into neo-pagan headdress to show my physical domination of these bytes of fast-twitch moronic agony.

But then I learn the TV is destroyed, but not destroyed enough. Only the screen was ruined. The speakers still function. My disappointed narrator comments through the ruin, "We lost this one…."

Hung sits down slowly. He’s looking at the ground.