This is a photo of BYU's Cody Hoffman slapping down a whale: 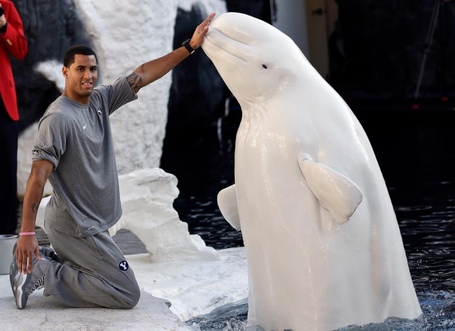 That's probably not condoned by the Church of Latter Day Saints, but it is also probably more acceptable than this. Have you watched Riley Nelson play quarterback? My, is it ever something, and by that we mean "a thing that is definitely necessarily preceded by some-." BYU plays a robust San Diego State team in the San Diego County Credit Union Poinsettia Bowl tonight, who quietly won their last seven games with brutal ground attack, sound defense, and a solid punt game. That phrase is all you really need to know about this game: solid punt game.

Still, there are reasons to watch, especially BYU's Ezekiel "Ziggy" Ansah, the rare player whose given name and nickname are both equally awesome, and Kyle Van Noy, coming soon to an NFL jersey on a fat white guy's back near you.

Download the whole thing here, or listen in the player below.