HAPPY HOLIDAYS. WE GOT YOU A SUSPENSION! 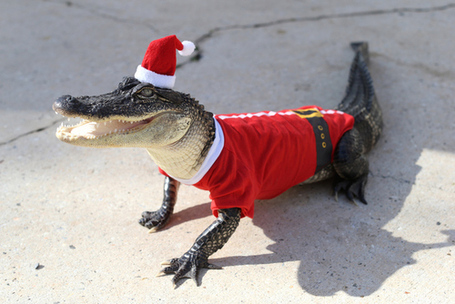 The alligator never forgets two things: the joys of Christmas, and that time Brad Wing ran a fake punt for a touchdown and had it called back for a taunting penalty. That's why he got you a suspension for Christmas, LSU! Brad Wing, that very punter, is suspended for the Chick-Fil-A Bowl due to a violation of team rules, legitimately taking LSU's most popular player off the field for their matchup against Clemson. That LSU's most popular player is a punter is so very LSU of them, but not more so than this: LSU has a a backup punter who was also born in Australia.

P.S. Les Miles has fooled all of you by suspending an Aussie for four hours, four hours that will occur sixteen hours ahead of Eastern Time. SUCKERS.

WHO IS MOST WEALTHIEST FABULOUS? That would be Texas, of course, but in true keeping with their mores as a fanbase Michigan is second wealthiest, and is probably deeply unhappy and conflicted about it. (Note: Michigan fans will be unhappy and conflicted no matter what happens because they have overly large consciences about money, athletics, and being an actual university.) Florida is seventh, but with all that money hidden in the Caymans you'll never know how accurate that number truly is.

GET JACKED FOR FIELD POSITION. The Poinsettia Bowl is gonna be about the most exciting part of football: DEFENSE AND PUNTING. Why, oh why, does the Poinsettia Bowl always suck? Science, investigate this important matter, and then get back to cancer and gravity, etc.

THIS IS A LEGITIMATE QUESTION. If Barry Alvarez is saying Bret Bielema won with his plan, then what the hell is he going to do with Gary Andersen's spread attack?

THEY LOOK FINE TO US. You have to serve them on a blue plate.

THE GREATEST OBIT OF ALL TIME. If your life's summary looks like this, you can retire to the dirt-lounge without regrets.