WHEN IT'S THIS HOT YOU GOTTA OPEN UP A WINDOW OR TWO. We worry about Al Golden the way we worry about Huskies living in warm climates. He's so clearly a man who should be living where it's fifty degrees or colder all the time, and yet has chosen to spend his professional life now in Miami, where the average high in August is 89 degrees and as humid as the inside of a shirt worn by...well, worn by Al Golden.

We don't even think he's trying to evoke a little night fever in Mrs. Golden here. It's probably a sweltering 68 degrees in that room, and the man has to open the vents just to get a little relief from the portable wetsuit he calls a body. We sympathize, Al, even if you are terrifyingly hairless. 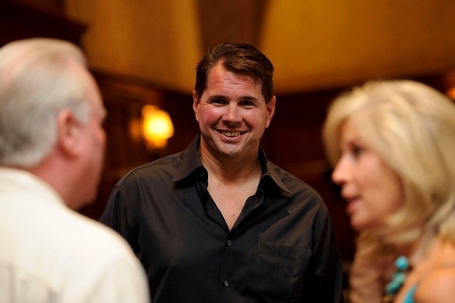 FLORIDA DOESN'T TRAVEL. Yet another reminder that alligators, while durable, have a very small habitat, and generally prefer not to travel outside of it.

THE NCAA iS VERY USEFUL. Without this, and this important guardianship of the line between amateur and professional athletics, the universe as we know it would collapse. Thank you, NCAA. We would text you Merry Christmas or Happy Holidays, but there may be a violation somewhere in there just thinking about it.

PAWWWWLLLL THE CHICK-FIL-A BEARCOATS DONE TOOK OUR PATTERN. We really hope Cincy trots out these for the Belk Bowl, because the idea of wearing something special for the Belk Bowl is funny for mysterious but still very real reasons. HONEY PUT ON YOUR FINEST WE GONE TO CHARLOTTE.

THERE IS NOTHING LIKE THIS IN RUSSIA. After wading through hours of video of jankety, chaotic business in Russia, it's quite the compliment when a Russian is impressed by your sport.

ETC. Yeah, fuck 'em. Doesn't matter if he gets in, ever. Dale Murphy is still the shit. Zadie Smith on joy is one literary type thing you should read, but if you haven't dusted off "Ulysses" by Tennyson in a while, do that because there are fewer endings better than this:

Though much is taken, much abides; and though

We are not now that strength which in old days

Moved earth and heaven, that which we are, we are---

One equal temper of heroic hearts,

Made weak by time and fate, but strong in will

To strive, to seek, to find, and not to yield.

And yes, that's the poem from Skyfall. RIP, Daniel Inouye, a badass among badasses. Real Steel is totally happening.