Todd Monken is taking over this space prison.

TODD FUCKIN' MONKEN. Southern Miss now has a coach, and that coach is fuck. Or Todd Monken, who may be lost under the pile of filth and expletives he uses to bring excellence to your football program. It would be a shame to lose his talent under all that, or his real, family-friendly quotability, but know this: he's coming for Conference-USA, and it's not going to be politely. 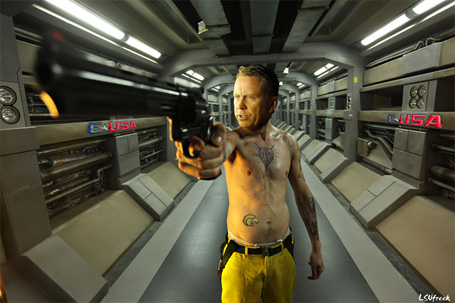 ALL HAIL THE SEC. The SEC Championship Game was the highest rated football game in all of college footballtelevision, with Alabama appearing in three of the top four slots overall. The other was Notre Dame/USC, i.e. the play-in game for the national title for Notre Dame, so everyone gets to make the argument they like: the SEC dominated ratings, or perhaps it was just all those Notre Dame fans scouting the opposition.*

*This assumes Notre Dame fans watch any other football games, which is false.

JOHNNY PIZZA. Our most scrumptious Heisman candidate ever probably remains Ron Dayne--so well-marbled!--but the Johnny Manziel pizza will have to do for now, even if it is made with the fake corpse-cheese Hungry Howie's uses on their pizzas.

TEE MARTIN WILL NOT BE RETURNING HOME. Because sometimes Mama calls, but you've got this really awesome job in L.A., and also because as an adult living in Tennessee when you could be living in Los Angeles is just not good for anyone. In lighter homecoming news, Neal Brown is returning to Kentucky, and Jared Lorenzen is lobbying openly for a job with them.

THE MIGHTY BUFFALO APPROVES. A cautious optimism settles in over Colorado like a gentle morning fog rolling down from...well, just about anywhere in the state, really.

IS IT A JOB? Then yes, Houston Nutt is very interested in said job, even if it is at FIU where they just fired a really good coach after one bad year.

ETC. My god, one day we will do karaoke with Yoko Ono and watch with glee as she empties the place in minutes. The United States Army's chemical weapons program was the best party ever, and had a real experiment called "Project DORK." Get on that twerk team, girl.