WHY WON'T YOU MAKE THE OBVIOUS CHOICE

Share All sharing options for: JIM CALDWELL IS ANSWERING YOUR PHONE RIGHT NOW

With obvious hat tips to great internet concepts of yore.

You probably need a coach because per a study from the American Bureau of Laser Statistics, every year 100% of coaches are fired. This includes yours, math guy, and that means one answer to your problem and one only.

Jim Caldwell is from Beloit, Wisconsin, aka "the gateway to Wisconsin." Jim Caldwell used to stand there as a child in Beloit and tell people, "HELL NO, WE'RE FULL, GTFO." No one listened, but Jim Caldwell created and honed his trademark JIM CALDWELL STANKFACE there. There is no actual gateway into Wisconsin. Please, never, ever tell Jim this. It would break his heart.

Emotion one of Jim Caldwell's bottomless repertoire: I HAVE JUST SEEN MY ENTIRE FAMILY KILLED BY BARBARIANS ON PIGBACK. 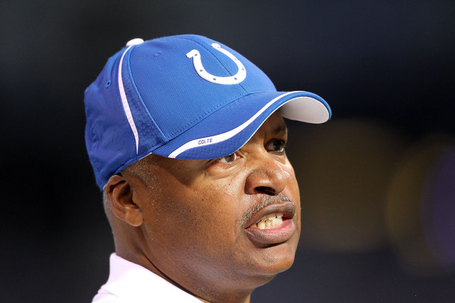 "I'm disappointed to have seen that."

Jim Caldwell then attended the University of Iowa, where he studied gridiron under Professor Hayden Fry. Fry described him as "a player for us in the 1970s," but said this while wearing white pants and wearing a mustache. Then Caldwell became an assistant coach and performed well enough to earn the profession's highest honor involving Wake Forest: THE MOTHERFUCKIN' HEAD COACHING POSITION AT WAKE FOREST UNIVERSITY.

SHOW US THAT SECOND EMOTION: I AM COACHING IN THE SUPER BOWL. 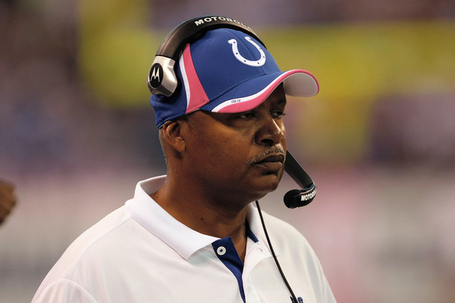 This pinnacle of my profession has me electrified at the opportunities. Let's show some enthusiasm and try to bring this one home for the fans.

Jim Caldwell won TWENTY-SIX GAMES at Wake Forest. That's as almost many as he won in the NFL. All Jim Caldwell does at every level is win somewhere between 26 and 28 games of football. Very few things in life are guarantees, but Jim Caldwell promise: you get him, and you will get more wins than that clownass sack of sad squash blossoms Jim Grobe ever had at Wake Fonest.*

*Wake Fonest is a private school in North Carolina in Jim Caldwell's imagination. HE CONTAINS WHOLE ALTERNATE REALITIES, LIKE ONE WHERE HE TELLS YOU THOSE TWENTY-SIX GAMES CAME OVER EIGHT YEARS BECAUSE WHISKEY AND JIM CALDWELL FOOTBALL TAKE THEIR TIME TO MATURE. Jim Caldwell is in a barrel right now. Maybe not by his choice, but he's definitely in one, aging his ass off thinking about you, hater.

Jim Grobe has also never had an NFL head coach come from his ranks of assistants, because the real ninja knows the student of today is the threat of the future.

Jim Caldwell beat the devil out of Arizona State 23-3 in the Aloha Bowl in 1999 because HE HATES THE FINGERS OF THE DEVIL CALLED SUCCULENT PLANTS OF THE DESERT AND PEPPERY FOOD because Jim Caldwell HAS IBS LIKE A BOSS and also THAT TIME HE GRABBED A CACTUS AS A CHILD.

Then he grew too big for sleepy North Carolina and threw himself into the crucible that turns men into gods: TAMPA BAY. Caldwell coached the shit out of Brad Johnson in Tampa Bay, teaching him to checkdown because that and insurance in Blackjack are the betting man's two best friends.

THEN JIM CALDWELL TAUGHT PEYTON MANNING'S DUMB LOUISIANA ASS TO PLAY QUARTERBACK. Show us what that felt like combined with the time you saw the sunrise over the Grand Canyon, illuminating all of the start, brilliant beauty of the desert in a manner that taught you how to personally transcend your own selfish fear of death and impermanence? Also, you were on cocaine, and it was great? 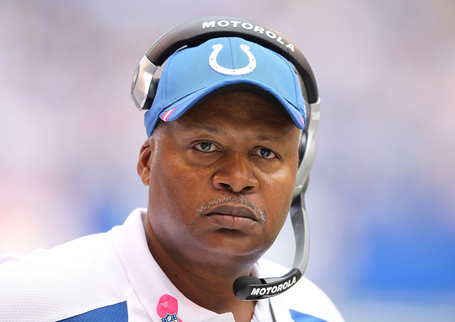 "I liked it a lot. It is an experience I will remember for several days."

When the BITCHASS COLTS decided they'd had enough of excellence, they gave ol' Jim his walking papers, but 2-14 sometimes has to happen by design because HUMBLE AIN'T FREE. He is now rocking the balls off the Baltimore Ravens offense because John Harbaugh finally saw the light and told Cam Cameron to MOVE OVER, MAYO JIM IS IN TOWN, AND THIS SANDWICH NEEDS SOMETHING SPECIAL but definitely not anything crazy like THAT CRAZY SPICY LIE THAT IS MIRACLE WHIP. 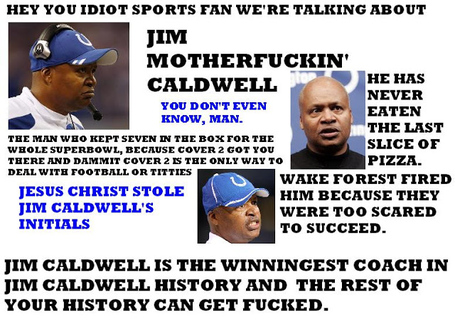