JIMMY JOHNSON RATES EVERY BOND MOVIE EVER MADE

COME TO THE KISS KISS CLUB WITH AMERICA'S BEST COACH EVER

Share All sharing options for: JIMMY JOHNSON RATES EVERY BOND MOVIE EVER MADE

Thunderball. I ain't admitting anything. But if an NFL coach were to return to work after a sudden departure from a Super Bowl Champion, and then return suddenly to work, might it have been because he blew his fortune re-enacting the entire plot of James Bond's finest film? And building a full-scale Kiss Kiss Club he burned down and rebuilt weekly? Against numerous environmental laws carrying fines that would drive anyone into debt? Not admitting a damn thing, but that might coulda happened. Perfection. Five marlins.

Casino Royale. Bond ends this movie single, handsome, and holding a gun while wearing a tailored suit. He also survives being poisoned at a poker game, an experience I've shared with 007. Don't play poker with Jerry Jones. Ever. Five marlins.

Licence to Kill. I never got to cut a player by putting him in a depressurization tank and making him explode. But I'm not dead yet, either. Four marlins. 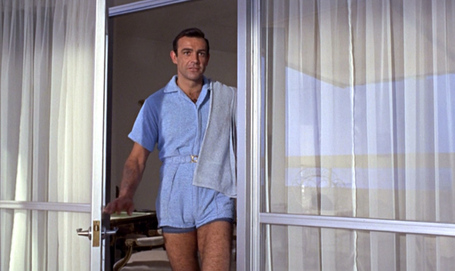 On the other hand, there's a lady painted gold. That's practically making her one living Notre Dame helmet, and I did enjoy doing unspeakable things to them. I'll give it four marlins for that and for Oddjob, the scrappy Zach Thomas of villains.

From Russia With Love. Tricking a man to open a tear-gas booby-trapped briefcase was my signature way to cut someone in Dallas. The film ends with Bond getting ready to bang out a little turkish delight in a gondola, and if you've never had sex in a boat with a poor Italian servant watching, you haven't lived, compadre. Four marlins.

On His Majesty's Secret Service. Bill Belichick has a Blofeld tramp stamp because of this movie. It's not pretty, but devotion is devotion. I liked it because of the ten female assassins. If there were one more of them, you'd have an offense better than the Eagles'. Which Eagles' offense? All of them. Every last single bitch-ridden one of them, ever. Three marlins.

For Your Eyes Only. I'm an open minded man, but this movie still makes me a little leery of Greek folks. That's why I've identified myself as Bob Papa during several police interviews. Three marlins.

The Man With The Golden Gun. You've got a private island. A bait-sized assistant. And a Chinese junk. AND YOU DON'T HAVE A SINGLE DAY OF DEEP SEA FISHING YOU GOTTA BE KIDDIN' ME BUDDY. Two marlins.

The World Is Not Enough. The most emotional Bond film.

The Living Daylights. You want a nice piece of Hollywood gossip? Joe Don Baker thought this was a documentary. Every time he'd have me over for dinner he'd pull out a crate of missile launchers, just offer me one of 'em. "Never know who you might meet in a dark alley," he said. Sights were off on it though. You're lucky JDB was sloppy, George Seifert. Two marlins.

You Only Live Twice. Never understood why James is so fixated on women washing him. If I wanted to watch a man with a hairy chest get bathed by five Asian ladies, I'd go over to Michael Irvin's house. Two marlins.

Octopussy. I've lived with several circus troupes, and not a single one spent more than six hours sober. And that includes the month I guested as Cookie on The Bozo Show. Two marlins.

The Spy Who Loved Me. Just awful. Did give me an idea that kept me from every having to waste time going to the dentist, though.

A View To A Kill. There's an action sequence involving a slow-ass blimp in this movie. I coached Dan Marino in his final seasons. You make the connection you need to make between these two sentences while I bite the caps off every beer in this twelve pack of Heineken. One lead-footed marlin.

Tomorrow Never Dies. Told Terry Bradshaw we were gonna see this and took him to Home Alone 3 instead. It's still his favorite Bond movie because my close friend Terry Bradshaw has severe brain damage.

Dr. No. Damn I know you nerds like this one, and I know why. It's old. You like old things just because they're old. That's a stupid way to live life unless you like getting written into heiress's wills. I've humped myself into no fewer than five, but not because I liked it. One marlin, because it's boring and I ain't into Scandinavians. Cold people right down to their carnival parts.

Quantum of Solace. I'm not a cinephile, but even I know Paul Haggis is to screenwriters what Dan Devine is to coaches. Zero marlins.

The Rocketeer. Pretty confused that James Bond turned out to be a Nazi. I've done some crazy shit to get women not half as jaw-dropping as Jennifer Connelly. But ExtenZe and National Socialism just ain't in the same ballpark, man. Zero marlins.