PRICE: So where you from man?

PRICE: You were born in a nuclear reactor?

HOLLY: Come on, just drive the car. You always ask this many questions?

PRICE: Hey, I used to be a cabbie. People expect a little chit chat. So you got a boyfriend?

HOLLY: I'm not flying on Christmas Eve for the fun of it.

PRICE: Ooo, we got a live one here! I tell you what - it doesn't work out with him, you give me a call. I know where all the best strip club buffets are in this town.

(They arrive at their destination, FEDORATOMI PLAZA. HOLLY tosses him a crumple of bills before heading into the lobby.)

HOLLY: Try not to spend it all in one recruiting violation.

TOLEDO COACH MATT CAMPBELL: Welcome to Fedoratomi Plaza. Who are you visiting?

CAMPBELL: Just put his name in on the touch screen.

CAMPBELL: Ah yes, the party. They're the only ones left in the building. Take the express elevator straight up.

(She is greeted by NORTH CAROLINA COACH LARRY FEDORA, President of the Fedoratomi Corporation.)

FEDORA: Welcome! You must be Holly - Doug's told us so much about you. Is it true you really look forward to visiting Shreveport? Oh, I'm sorry, you must be tired. Doug's office is just down the hall, third door on the left. And please, enjoy the party! 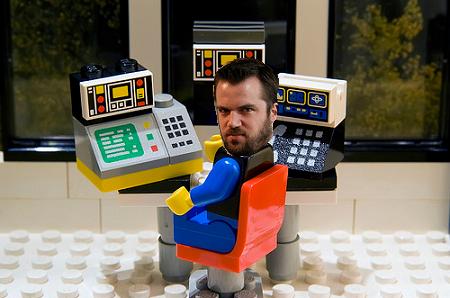 DOUG: Holly! I'm so glad you made it.

HOLLY: Doug, this is ridiculous. I never get any time off, and you expect me to spend my Christmas with a bunch of college coaches?? Just once I want to take a vacation without having to think about football! This can't be how we live forever.

DOUG: You're right, it can't. And that's why I think we should get married. Stay right here, I'm going to go get the ring.

(A stunned Holly slumps into a chair, absentmindedly breaking apart a Lego bust of Matt Stafford.) 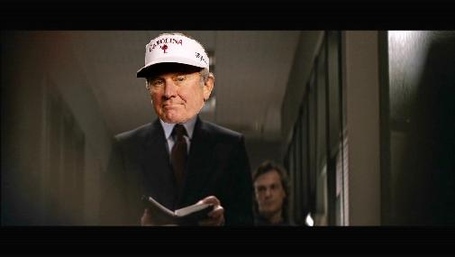 SOUTH CAROLINA COACH STEVE SPURRIER: Ladies and gentlemen! Due to the NCAA's ongoing legacy of corruption across college sports, they are about to be taught a lesson in real power. You will all be witnesses. Now, Coach Fedora. Let's have a chat, shall we?

HOLLY: Well fuck this leathery piece of shit. Let's see how he likes having the tables turned against him.

CLAWSON: That Spurrier better not double cross me. I deserve that Tennessee job.

(Back with the hostages, Spurrier is speaking.)

SPURRIER: Coach Fedora decided to become a hurdle rather than a help to our operation, and he has suffered accordingly. Let this be a warning to you all: help is not coming, so you would be wise to cooperate, lest you join him.

(Suddenly, the elevator door opens behind them.)

FLORIDA STATE COACH JIMBO FISHER: NO! I WILL DESTROY WHOEVER DID THIS!

SPURRIER: Jimbo! Calm down! We have a job to do here - once we get into the computer, you can tear the building apart with your vengeance. But not before then. You understand me?

HOLLY: (over the radio) Guess Florida State's not back, huh, Steve?

SPURRIER: Well, if it isn't our unwelcome mystery guest. You are most troublesome for a journalist.

SPURRIER: Who are you then?

HOLLY: Just the fly in the ointment. The monkey in the wrench. The wheel route against a cleared-out safety.

SPURRIER: You have me at a loss. You know my name, but what should I call you?

HOLLY: I was always partial to Aunt Stabby.

SPURRIER: Do you really think you have a chance against us?

DOUG: (whispering to WISCONSIN COACH BRET BIELEMA) I think that's Holly. Oh man, did they fuck with the wrong woman.

BIELEMA: Her cowboy act is going to get us all killed. But ole Bret has this one covered. Hey! Steve! Let's talk turkey, shall we?

SPURRIER: What do you want?

BIELEMA: It's not what I want, it's what I can give you. Personally, I don't care about your politics, that's none of my business. You're here to negotiate, right?

SPURRIER: You figured this all out already?

BIELEMA: Business is business. You use a gun, I use an ACC transfer. But that girl up there who's fucking things up for you? I can give her to you. Steve, baby, I'm your white knight.

LEMBO: Must have been a false alarm. There's nothing going on here.

(Suddenly, the body of NEVADA COACH CHRIS AULT comes flying down from the building and lands on Lembo's police cruiser.)

HOLLY: Welcome to the MACTION, pal!

SPURRIER: (over the radio) Are you still there, Aunt Stabby? Or should I say...Holly Anderson? I've got a friend of yours who wants to speak with you.

BIELEMA: Holly, I'm here to try and talk some sense into you. I know you think you're doing your job, but you're just dragging this out. They want to know where the detonators are or they're going to take my Rose Bowl trophy.

(A single gunshot rings out over the radio.)

SPURRIER: Where are my detonators, Anderson? Shall I shoot another one? Perhaps eventually I'll get to someone you really care about.

FLOOD: Officer Lembo? I'm Special Agent Flood. This is my partner, Special Agent Fitzgerald. We're here to take over jurisdiction, since this is a federal matter now.

LEMBO: Just what I need, you damn AQ guys giving me a bunch of jurisdiction bullshit. Do you even know what's going on up there?

FITZGERALD: Listen, buddy, we both beat Syracuse, so don't you start questioning our qualifications. We're taking over and we're planning an assault as we speak. With any luck this situation will be over within an hour.

LEMBO: Assault? But they've still got hostages up there!

FLOOD: Minimal civilian casualties are something we're willing to tolerate. Chopper Nova, you have the green light. Let's take off and hit these guys hard, Gary. 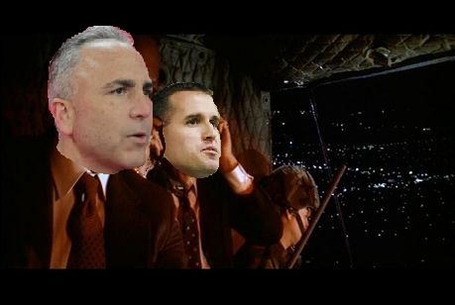 (The helicopter flies into a city bus and explodes. Inside the building, Spurrier's crew has made progress.)

BYU COACH BRONCO MENDENHALL: Steve, I've cracked the final code! We have access to all of their computer systems!

SPURRIER: At last! Now I have control over every tee time booking east of the Mississippi!

(Out of nowhere, a series of gunshots puts Mendenhall down. Spurrier grabs Doug as Holly enters the room.)

HOLLY: So you did all this just for golf?

SPURRIER: Not just golf, Holly. Early access to the drink cart! Free club repair! Discounts on clubhouse hot dogs! You can't even fathom the power I've taken in one fell swoop tonight. It's greater than any hole in one.

HOLLY: Funny you should say that...

HOLLY: ...because now there's a hole in YOU. 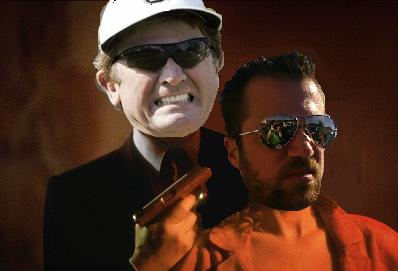 (He tumbles backwards out the window and falls to his death. Holly and Doug embrace, and make their way downstairs.)

LEMBO: You must be Holly. Damn glad to meet you.

HOLLY: Pete, this is my future husband, Doug.

LEMBO: Pleased to meet yo-GET DOWN!

(A bloody and furious Jimbo Fisher bursts through the crowd and takes aim at Holly and Doug, but suddenly...)