It's not surprising that a Crimson Tide fan did this. What's surprising is that Saban didn't end up with Alabama's nine electoral votes.

Share All sharing options for: VIEWERS' GUIDE, WEEK 11: VOTE WITH YOUR REMOTE

You cast your meaningless vote on Tuesday — now are you ready to make a decision that's REALLY inconsequential? Picking college football games to watch on a fall Saturday is way better than voting, anyway: you don't have to leave your house OR worry about irrevocably screwing up the country. Unless you choose to watch Pitt-UConn on Friday, because seriously, dude, that's just sick. I mean, I guess I can't tell you or any other consenting adult what to do in the privacy of your own home, but still, ugh.

All times Eastern, and the polls don't close until January.

What you'll be watching: No. 8 Florida State at Virginia Tech (ESPN, 7:30 p.m.)
"How could they relegate a potential ACC Championship Game preview to Thursday night?!" Oh, honey, there are so many things wrong with that sentence. For one thing, the conference title game may or may not even be mathematically possible for the Hokies at this point — it's so hard to tell with the Coastal Division basically being a scrum of teams all seemingly headed for 4-4 in conference play. At any rate, whatever matchup the ACC's Commodore 64 does spit out for the title game is likely to be the most Thursday-night game ever. (At this point I'm pretty sure it could still be a Clemson-Duke rematch.) My point is that any emotional investment in this game on your part will only be cruelly betrayed.

What you should be watching instead: Louisiana-Monroe at Arkansas State (ESPNU, 7 p.m.)
Yes, ACC, you're basically staring up the Sun Belt's ass in terms of watchability at the moment. Don't feel bad; the B1G and Big East are right down there with you. Just think of this as an opportunity to scout replacement coaches for when Spaziani, Edsall and/or O'Brien are finally invited to hit the bricks. Then again, going straight from Randy Edsall's offense to Gus Malzahn's might get ol' Gus burned for witchcraft in College Park.

What you'll be watching: Pittsburgh at Connecticut (ESPN2, 8 p.m.)

What you should be watching instead: "Precious" (Oprah Winfrey Network, 8 p.m.)The less depressing of the two viewing options, I assure you.

What you'll be watching: Northwestern at Michigan (ESPN, noon)

What you should be watching instead: Missouri at Tennessee (SEC Network, 12:21 a.m.)Something about this game reminds me of that scene from "The Dark Knight" where the Joker tells the two thugs he's only got one spot open in his "operation," cracks a pool cue over his knee and tells them he's holding "tryouts." Mizzou is so banged up at the moment that Gary Pinkel recently became the recipient of an Onyx Card from Kaiser Permanente, yet still managed to creak into the Swamp and hold Florida to its second-lowest scoring output of the season. Tennessee, meanwhile, hosted Troy and gave up an amount of yardage I'm pretty sure only Neil deGrasse Tyson could accurately calculate. Something's gotta give in Neyland this weekend, and my guess is "the space-time continuum." 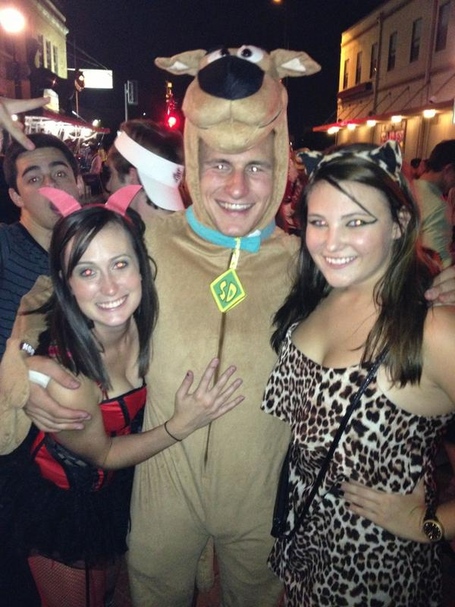 What you'll be watching: No. 15 Texas A&M at No. 1 Alabama (CBS 3 p.m.)Yeah, we know, you're gonna tune into this thinking that A&M and Johnny Manziel have a chance at doing what LSU could not and knocking off the mighty Crimson Tide. Alabama will let you think this for about 15 minutes, and then their defense will unleash hell on Johnny Football. Don't feel bad, kid, that's longer than that poor kid from Mississippi State got.

What you should be watching instead: No. 13 Oregon State at No. 16 Stanford (Fox, 3 p.m.)Sure, this is probably only a battle for second place in the Pac-12 North, but actual defense does get played in the Pac-12 sometimes these days, and this is likely to be one of those times.

What you should be watching instead: Vanderbilt at Ole Miss (ESPNU, 7 p.m.)

What you should be watching instead: No. 17 UCLA at Washington State (ESPN2, 10:30 p.m.)
Do not adjust your TV sets: UCLA is currently alone in first place in the Pac-12 South. They do have two games left, one of which is USC, but wouldn't it be the most UCLA/Jim Mora thing ever to blow it the week before in Pullman? And wouldn't it be the most Mike Leach thing ever to cause it? "I mean, I know they want to go to the Rose Bowl and everything, but . . . f&%$ it, they play in the Rose Bowl every god-dang weekend, so why should I care?"