Part two, delayed by life and a real unwillingness to write it.

2. (Antonio Morrison knocks E.J. Manuel into the next hemisphere.)

3. Eight months--punctuated by one lonely bowl game, spring practice, and the fax-machine obsession that is signing day--is nothing I want to think about right now for that reason, but not that reason alone. I had to resort to mock science to figure out why. 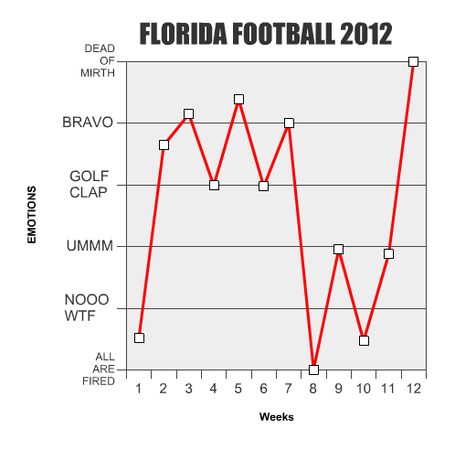 4. I know it says eleven wins, but seriously I have no idea how those eleven wins happened, particularly the wins in weeks one, two, seven, nine, and ten. Against Bowling Green, Texas A&M, Georgia, Missouri, and Louisiana-Lafayette, Florida resembled a diabetic, overweight George St. Pierre, seemingly unaware that football games cannot be won by decision, and that the scorecard at the top of the stadium is the only judge. There is not such thing as a real diabetic, overweight GSP, but if you just imagined it in the tiny black MMA hot pants? You're welcome.

6. Even in victories, Florida's totem video game spirit was this: 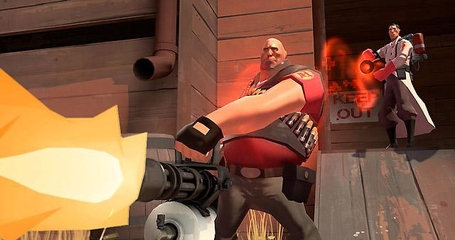 Heavy Weapons Guy doesn't believe in a lot of things: getting out to quick leads, or hurrying, or doing anything not included in the plan. He doesn't believe in getting creative, or even much in the way of tactics, cunning, or guile. HWG has a gun. It has ammo--way more ammo than you have, and way bigger and nastier when it rains out of its barrel. The plan is to discharge it all and wait for you to do the same. Some are smarter, yes. But Will Muschamp football has yet to meet smartypants who can outsmart bullet.*

*Bullet is nickname for Matt Elam. Goes wherever it wants. Kills bystanders from time to time.

8. (Jordan Reed catches a middle screen pass and rumbles 13 yard on 3rd and 12 for a first down.)

8. This culminated in the month of November, where no one had any clue what Florida football was doing. WE BEAT THE RAGIN' CAJUNS ON OUR HOME FIELD THANKS TO A BLOCKED PUNT. That happened, and what nearly happened--going to overtime against a very game Louisiana-Lafayette team--would have been so much worse than what already was baffling and inexplicable and very nearly unwatchable. There were also long, stultifying hours called the Mizzou and Jacksonville State games. The less said of any of these, the better.

9. So pardon anyone watching for passing out when Florida came out against FSU--preseason winning, five-star recruit flooded Florida State, the team returning to form for the fourth year in a row--and scored on their first possession. Three points, yes, but math ain't never won a football game, has it perfesser? You should read this in Will Muschamp's voice, preferably with that laconic eat-shit-and-die face he gets when asked about "Look-back" offenses or Padawans.

10. (Marcus Roberson picks a pass out of nowhere.)

11. And pardon them a second time if, after watching Florida State turn into a Jimbo Fisher's best rushing attack in his tenure in 2012, the FSU offense didn't morph into a shambolic elderly cat, coughing up turnovers like so many beslimed hairballs on the green carpet of Ron Zook Field. Florida State, for going on something like a decade now, has recruited the same quarterback every year, a talented, mobile dual-threat who under pressure goes to ribbons and starts all but handing the ball to the defense.

12. (Lerentee McCray bats a pass in the air, giggles.)

13. Was Chris Weinke the last distinct FSU quarterback? This is a serious question. They blend together into one create-a-player with different skins and detailing, one big Rix-a-Weatherford-Lee-Manuel-a-Pondersaurus. Add any two of them together, and you get one of the other three.

14. Because nothing was unsurprising about this year, the Seminoles countered in the second half, and this is where November appeared seconds from spawning a monstrous loss to Florida State, and in the same bitter, evil fashion of the Georgia game. You give the ball to the opponent, and more often than not they have a tendency to score with it, and suddenly the score was 20-13 at the end of the third.

15. (Jeff Driskel scrambles with a mangled ankle, somehow is not killed on the play, throws full across his body for a completion.)

16. Bjoern Werner was all over that third quarter. It was fun to joke about him being Florida State fans' favorite player not just because he was white, but because he was German, and thus the Neo-Nazi prototype of Seminoles' fans dreams. The part about him being a Teutonic killing machine is not funny anymore: he is, and he laid the kind of sack on a quarterback that is our favorite, the front side, truck plowing through your living room, and right in the jaw and through you to the ground.

17. Then the oddest thing happened: Florida, out to a lead and overtaken for the first time, counter-counterpunched. It was not a desperate edge tiptoed to the finish, but a a rain of anvils and whole chunks of iron. Field goal, turnover, Gillislee TD, long punt return, passing TD, to Dunbar, and then the meanest part of all, backup running back Matt Jones emptying the cartridge with a 32 yard TD to go up 37-20.

19. Twenty-four points in the fourth quarter, the quarter Florida had owned in 11 of 12 games this year, the hammer applied on the road and applied late and with great cruelty: that was this game, as long as the call from the front desk up to room 425 at the Hilton Garden Inn making sure that no one was being killed in my room.

20. You finish some seasons with clarity, or dread of what is to come, or even--on very rare occasions--with something like elation. This year it's hard to feel anything but stunned appreciation for the tenacity, the patient bastard cruelty of this team. At times, they appeared to be a team of hunger artists, surviving on as little as possible and advancing by the slimmest of margins. Half of the games felt like grim procedure, marginal games played at the margins by design. 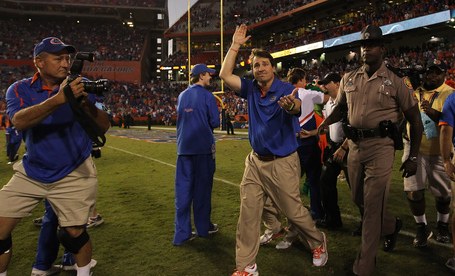 21. The other half: knuckle-dragging exhibitions of sheer malice, conducted with the highest degree of savagery we've ever seen associated with Florida football. They baited opponents into the fourth quarter, playing a game whose sole focus was maximizing pain--sometimes for you the viewer, but more often for the team on the other side of the football. I have seen better Florida teams in terms of skill, power, and utter devastation capacity. The 2008 team toward the end of the season was a death machine, vaporizing people before the half and capable of deep brutality of its own. The 1996 team evaporated opponents without dampening a headband.

22. I have never, ever seen a tougher Florida football team. Never. And at the end, where you don't care about the next game, or the next opponent, or national title chances being bounced around other quarters of the college football world, that should be enough. It is for this team and the metaphor of your choice to describe it: the whip-scarred mule that didn't die in the mines, the fighter who doesn't wake up until blood starts running into their eyes. I don't know if anything can describe it, but the sight itself is probably enough. Heavy Weapons Guy just keeps firing, and firing, and firing. The fight will be right there when you're ready. And even if you win, smart guy, you'll bleed. Oh how you'll bleed.

23. (Dominique Easley does his whole postgame interview talking about the black pit of pain in his heart he wanted an opponent to feel while eating from a gigantic tub of animal crackers.)