Dan Phillips of Fox 17, you've made a huge mistake.

Starting yesterday afternoon, a TV sports news guy in the Nashville area, Dan Phillips, started doing what opinionated sports bros of his ilk do on the social media network, Twitter: spitball. It began innocently enough with the following (read from the bottom up for maximum chronology): 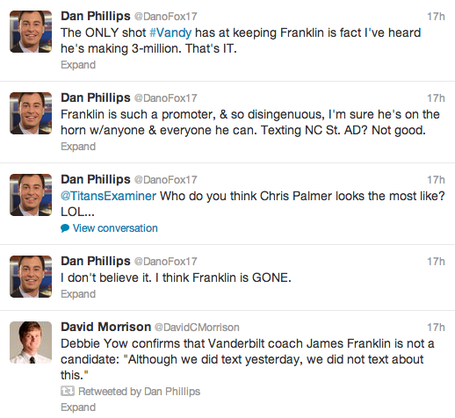 A prediction that James Franklin, he of the making Vanderbilt relevant on the SEC recruiting scene and capable of hanging around with the middle tier of college football's best conference, would try to cash in on his mercurial rise and go to greener pastures isn't exactly outside the realm of what Vandy fans should be accustomed to hearing by now (and especially will hear in the next several months as the coaching carousel kicks into fifth gear).

But such an injustice can't stand unchecked, now can it?

Now we're cooking with gas. Phillips' timeline would be bombarded with similar tweets for the better part of the rest of yesterday.To Phillips' credit, he dialogued with a high number of the scorn Commodores fans, before attempting to raise a white flag of sorts:

They don't call it Feelingsball for nothing, now do they?

But then shit got REALLY SEC:

Hashtag responsible journalism. There was a lot more of this, including Phillips criticizing Franklin's "ego" and his use of coach speak as being disingenuous. If Franklin elects to stay in Nashville, he should totally break the news in an exclusive one on one with Phillips.

You should probably do yourself a favor and read the rest of his timeline for maximum lulz.