BLATANT HOMERISM, PART ONE: THE THING WE DID BEFORE THE FSU GAME

WE DID WATCH MICHIGAN/OHIO STATE THIS WEEKEND. NO BIG DEAL.

Share All sharing options for: BLATANT HOMERISM, PART ONE: THE THING WE DID BEFORE THE FSU GAME

1. I wasn't in Tallahassee this weekend. I was in Columbus, Ohio, standing in the endzone high up in section 32B, looking down at a guy in a white jacket stand at the thirty yard line hugging seniors. Not his seniors, technically; they were seniors recruited by another guy, a guy who was hauled onto the shoulders of the 2002 BCS Title team and treated to a thunderous ovation later that day. Jim Tressel looks older, but then again, he always did. Jim Tressel was born fifty, and he'll die at fifty.

2. The temperature hovered around thirty-two degrees all day, and a light snow kept sneezing through the air like three-dimensional television static.

3. Florida was preparing to play in Tallahassee, where the temperature would peak at sixty-seven degrees, and get down into the forties when the sun dipped behind the cock-and-balls profile of the Florida state capital. Florida and Florida State players dressed as they usually do for temperatures like this: wearing more clothing than anyone on the field in Columbus was wearing. 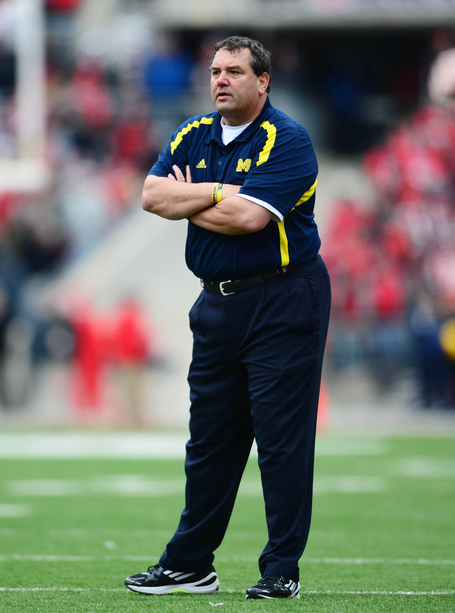 MANBALL DOES NOT ACKNOWLEDGE THE THERMOMETER OR OTHER IMPOSITIONS OF NATURE ON MANHOOD.

5. While Will Muschamp was chewing whole pieces of cedar in two and raging through pregame, we were all in 32B, where there were two Michigan fans and several hundred people wearing scarlet jerseys, all stamping feet, bouncing up and down to "Seven Nation Army" not out of fervor but as much to stay warm, and feel something like human feelings in the feet. That high in the stadium, you can see the old shell of Ohio Stadium: the roman stylings on the columns, the grave letters spelling out "FRIENDSHIP THROUGH CONTEST" on the walls, the twin outlines of poured concrete cake stacks topping the north end, peaked with flags whipping straight in the wind for the entire three and a half hour contest.

6. Two policemen stood up there the whole game, their silhouettes framed against a sky so dull and gray it transcended Midwestern cliche. Those two men are likely still shitting icicles today, and will be for most of the week.

7. I was ready to bolt The Game early if I had to, but fortunately Midwestern football is polite and runs on a schedule. After Denard Robinson scored on Al Borges' mind-blowing two-minute drill (sweep left! then sweep right!) the game calcified, presumably frozen by the elements and both defenses clamping down on whatever was going on in the first half. Braxton Miller was largely corralled, and Carlos Hyde was left to pound out the Michigan defense and put the Wolverines in the horrendous position of doing whatever it is that Al Borges wants the Michigan offense to do.

8. No one knows precisely what this is, save from calling really obvious rollout passes that the Georgia defense was picking off back in 2006. You, Devin Gardner, are no Brandon Cox. (Mostly because Gardner only threw one pick, and Cox was good for at least three against Georgia at any given time He also did nothing but beat Florida. I hate and respect you, Brandon Cox, and always will.)

9. The odd thing--besides the dead-on certainty that, in the five assholes out of one hundred you will see at any game, the ones at Ohio State are wearing Buckeye snapbacks, jerseys, and look like Landry Clarke from Breaking Bad--is how much Ohio State looked like every other Urban Meyer team ever. They had none of the lethargy of the 2011 Ohio State team, and played the same submission ball in the second half that Meyer's best Florida teams played.

10. The second thing: how similar in attitude this looked to Jim Tressel's best teams. Instead of forcing the issue--faking a field goal, trying an onside, or simply heaving the ball downfield hoping something might break the stasis--Meyer's 2012 team did what a Jim Tressel team would have in punting, taking field goals where it could get it, and then daring Michigan to do something with the ball. That something was the same rollout pattern Michigan had tried all game long, and that something ended up being the game-clinching Interception.

11. This was all far more entertaining than it sounds. You could hear Gardner getting hit up in the second deck where we were. If you have opiates, please bring them to the Michigan football offices. They are in need of them.

12. Ryan Shazier is a very mean person. Do not ever, ever deny him a single request.

13. The best Michigan/Ohio State interaction: Snapback Todd eight rows up somehow finds out the name of the adorable, dewy-eyed 20 year old Michigan blonde lady in front of us. Her hame was Lori, and once he discovered this he put it to use.

Next to her, a Bro-hioan of the highest caliber in a hoodie pulled over his head with a lip in shook his head, turned to her, and sighed.

He didn't offer to share his dip afterward, but that was probably implicit.

14. Also, I have no idea if this team would have competed for the national title this year, but I suspect the same is true for 2012 Ohio State and 2012 Florida: you'd want them next year with a clean slate and another year of experience for the quarterback and skill position players on offense, and just take this year as a happy surprise without gnashing teeth over what might have been. That is an unusually sane opinion to have about your football team, so please immediately reject it on principle.

15. Ohio State's band SLAUGHTERED Michigan's band. If this were a football game, it would have been Florida State/Savannah State. I remember the Ohio State band nailing a straight line across eight yards of formation, and the Michigan band doing a half-assed boogaloo before farting away quietly for the remainder of their show. The Best Damn Band in the land is an affront to college marching bands in the sense that they appear to work hard, have discipline, and wear clean uniforms while playing a mean version of Stravinsky's Firebird.

16. That is a compliment, because all of those things are usually good, and it makes other college marching bands look bad in comparison when you're all good at things. Well-done.

17. In summary: Ohio Stadium is brutal, gray, loud--yes, loud, by any standard--mean, cold, and constructed out of concrete bearing a few too many visible cracks for you to be totally comfortable seeing in a structure capable of holding over 100,000 people. (The ledge from the upper deck on the east and west sides had me hyperventilating.) There are grim bells, columns, and one jumbotron plastered onto the south endzone. The effect is that of a flatscreen slapped on the wall of a Roman gladiator's quarters, something very modern hanging on a wall bearing the scars of prehistoric combat.

18. Which, in cliche and reality, is totally what Michigan/ Ohio State is. I get that now after seeing it, because this is not about fun, glorious spite, or simple culture-clashes. Robots programmed this rivalry, and its only prime directives on either side is opposition. You may joke about other rivalries claiming to have been at war with Eastasia, but to either side, the war is eternal, and it is the other side that believes in obliteration of the self and will not stop chewing at the borders of the free nation of Oceania.

19. It feels old, and wears its own leather helmet while drinking scotch and staring at a gray sky. It had been a while since I'd been in the Midwest, and the thought initially filled me with a real and arbitrary sorrow. Driving through Columbus, there are all these lost things--cabbies that arrive on time, bland family restaurants with buffets and non-chain restaurant names, bells that ring in buildings ripped from a Wes Anderson movie's backlot--all these things that never existed where I'm from.

20. There is an order, an assumption of things that feels almost German, an implicit clockwork frame for things that has the dead hands of old Northern Europeans all over it. A cop stopped us jaywalking in easily negotiable traffic to say "please, be careful." He wasn't being a dick, either: he was dead serious. A woman at a tailgate asked us if we wanted any food, and then put the full Chinese grandmother press on us not because, well, you had to eat, didn't you? You couldn't just go hungry? Four avuncular guys broke out singing "I wanna go back to Ohio State" in the middle of a tailgate, and no one stopped to gawk, but to listen appreciatively. They were pitch-perfect, and sprung up out of nowhere before melting back into the crowd wearing uncle-ish clothes, and toting red solo cups full of spiked cider.

21. It felt like America being filmed on a pre-stressed set made to look just a hair older than it actually is. It felt foreign, and planned, and utterly intentional in every way, as if people hadn't just laid down an interstate, kinked the traffic hose, and lived in resulting wreckage. It had an order and age that nowhere I've ever lived had, or at least held for too long before bulldozing it and replacing it with something that looked like a La Quinta.

22. Maybe that, in the end, is what makes Michigan/Ohio State so titanically death-y, huge, and haunted. There is a straight line connecting each game to the next, and the team, and the silent orders who keep the verse, chapter, and books safe somewhere. There is a continuity, one that says Brady Hoke should wear short sleeves because no, it is not cold, Professor Hayes, and yes, that the PA announcer will say "The school up north" before the game, but refer to Michigan by its proper name when the fight has started. That straight line terrifies me for the same reason every tradition does: because it goes onto the horizon, past it, and past me. There will be the same bulidings. They will have different, strange people wearing terribly familiar colors walking their halls.