TOM RINALDI BY THE NUMBERS

IS TOM RINALDI BAD FOR YOU?

Share All sharing options for: TOM RINALDI BY THE NUMBERS

Tom Rinaldi is the glint-eyed leprechaun of ESPN, the poplin clad popinjay of purple prose with two freshly unthreaded pockets in his well-tailored jacket. In one he has inspiration. In the other, some kind of powder giving you a wasting disease, horrendous traumatic life experience, or a close relative with one or the other.

It's not that we weren't crying like a beestung child at this Saturday's latest Rinaldi segment, a very real story about the child of Wake Forest assistant Tom Elrod who, born with an inoperable brain tumor, died after just a week of life. Watched in isolation, without really thinking about who is doing it, it does what it is supposed to do, which is break your heart, wrap it in a carpet, and roll it into the Moyka River like the corpse of Rasputin.

That Rinaldi appears on your television in the midst of sporting television, beaming one minute, and then dropping his eyebrows and hiding his chiclet-sized teeth behind his lips for SERIOUS TIME every other week is the odd part. At first he could surprise, but now the tinkling piano and rain of terminally ill characters cues a a run for the remote and sounding klaxons that yes, this is not a drill, and yes, if you do not want to shake the images of juvenile cancer or paralyzed athletes from your head for the next three hours, then you need to flee the channel now, and with all due haste.

(The average Rinaldi segment is about five minutes, for those interested in how long emotional mustard gas takes to go to ground harmlessly.)

But how likely is it, we ask, that having Tom Rinaldi showing up like the angel of death at your door means you are seconds from dying, having a terrible disease, or suffering a freak jetski accident turning you into a brainjar connected to a speaker? ("I'M SO GLAD TO ADDRESS YOU AT HOMECOMING. MORE NUTRIENT FLUID IN MY JAR, PLEASE.") Is he really the vulture we imagine him to be, the reporter whose very appearance guarantees personal calamity of an incalculable nature and an appearance by a retired jazz pianist? Or have we gotten him utterly wrong by the numbers?

We seek to answer just this question with science. 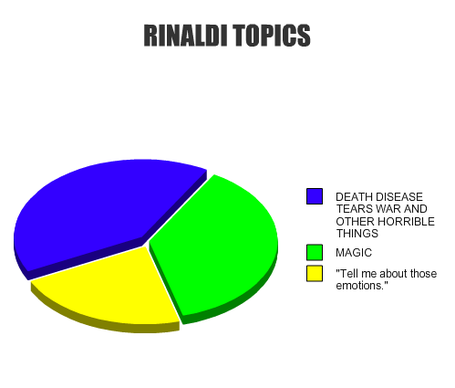 Rinaldi has about 30 stories indexed and available on ESPN's website. These fall into three different categories.

The first category covers disease, disaster, nasty misadventures of history, child abuse, rape, and anything else remotely tragic. The second is light, feature-y business about general aura and "sports magick." The third is the panderview, where Rinaldi sits in a chair, asks easy questions, and then jacks a page from Roy Firestone by attempting to make them weep on camera.
A mention of Roy Firestone will always include the following video.

If Tom Rinaldi shows up at your door with an interview request, a fresh spritz of breath freshener on his palate, and the angel of death on his shoulder, chances sit at about 40% that you are seconds away from being indirectly or directly fucked by life's least entertaining game of chance.

This may sound bad, but the numbers tell us a different story. Considering the 100% fatality rate in life, being a Rinaldi subject is actually much safer than actually living. In fact, being the subject of a Tom Rinaldi story gives you a 10% chance of getting cancer, beating life's 50% cancer rate and 25% fatality rate by a significant margin. It also gives you a 3% chance of being a lucid 92 year old Japanese-American judo coach. That's better than cancer, and pretty cool all on its own. You could also end up being Derek Dooley's pants. That's bad, because you'd be fired pants, and employed pants are really the preferred choice of sane people everywhere.

So in conclusion: as much as we'd love to claim Tom Rinaldi was himself a kind of karmic Typhoid Mary, the Rinaldi touch is in fact a sort of disinfectant, making you healthier than the general population by correlation. He's practically a one-man nutritional supplement and doctor's visit in one, a bland statin drug full of antioxidants tramping around the nation in Italian loafers. We are just as shocked as you are...

...but not as shocked as the day John Exeter, promising young running back from Tech University, was diagnosed with Botfly Chimp-phoma, a rare disease with an even rarer side effect: flying chimpanzees nesting in his skin, which would ultimately hatch without warning...