Giving back is always the right thing to do, and yes this sort of doubles as a joke about USF's turnover problems.

UTAH STATE COACH GARY ANDERSEN: Fellas, I just want to thank you all for helping out with this charity drive. The upcoming holidays are always a tough time for the less fortunate, and that'll be an even larger group of people what with the recent storms. The money we raise from this auction will really go a long way.

DUKE COACH DAVID CUTCLIFFE: It's the least we can do, really. My first call after I read your email was to the Mannings, and those boys came through just like always. I've got a couple of autographed helmets from Peyton and a signed preview edition of Eli's new book. 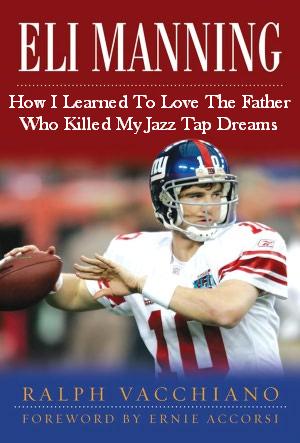 ANDERSEN: These are gonna be great, David.

ANDERSEN: Well, that, uh, that's very thoughtful, too. But I'm not sure there's going to be a big market for that.

SOUTH FLORIDA COACH SKIP HOLTZ: I will give you sixty grand for that win right now.

BAILIFF: So long as you're not trying to use it in Kansas, yes.

NORTHERN ILLINOIS COACH DAVE DOEREN: Sixty thousand ain't nothing compared to what people will pay for the MACTION EXPERIENCE PACKAGE! The winning bidder and a friend get kidnapped on a random Thursday night and taken to rural Ohio. Then we put 'em in demolition derby cars and make them race. Only there's a catch! The brake in the car - is actually a second accelerator! Winner is the last one to pass out from smoke inhalation. 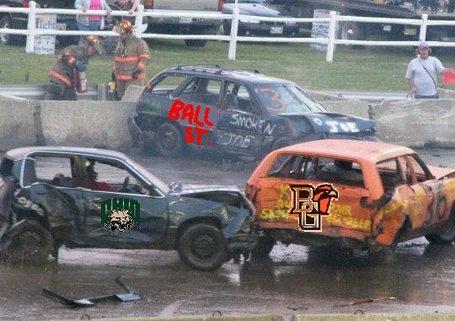 ANDERSEN: Well, I guess fans will be interested in unique experiences...

EAST CAROLINA COACH RUFFIN MCNEILL: Nothing quite as fancy from us, though. Just a couple of sideline tickets with ol' Ruffenstuff.

ANDERSEN: Well, I think that will pull a nice auction price, Coach! Which game did you pick?

MCNEILL: Oh, not at a game. We got a team to run, after all. Just planning to let some lucky fan have lunch with me on a spring afternoon. Ruffles brings the cold cuts, you bring the cheese and crackers. Talk about feelings. Share dreams. Like the idea I keep having about a kitten detective.

MCNEILL: That's a detective who investigates kittens. Not a kitten who solves crimes. Ruff The Magic Dragon knows how crazy that would be.

MIDDLE TENNESSEE COACH RICK STOCKSTILL: After we beat Georgia Tech, Paul Johnson called me up and told me he was sending me something, something very valuable to him. What was it he said...something like, "a defeated general yields the spoils of his city to the conqueror."

ANDERSEN: This is a box full of chicken broth cans.

STOCKSTILL: I think that's all he eats.

ANDERSEN: It's still very much appreciated, Rick. Joker, what did you bring for us to list?

KENTUCKY COACH JOKER PHILLIPS: Are you fucking serious? Nobody wants to buy anything Kentucky football. You want a shitty quarterback? I got a couple of those. Maybe some game tape? It's just old episodes of Step By Step with the audio reversed but who gives a shit now?

ANDERSEN: Ok, easy there. We're just trying to raise some charity money is all.

PHILLIPS: I'm getting tossed out of LEXINGTON, asshole. Excuse me if I'm not feeling all deck-the-halls and pass-the-stuffing and dad-puked-in-the-stockings.

MICHIGAN STATE COACH MARK DANTONIO: This is a great idea, Gary, and on behalf of Michigan State I'm happy to offer this voucher good for one roofing performed by Andrew Maxwell and Bennie Fowler.

ANDERSEN: I had no idea they had construction experience!

DANTONIO: Well, they don't, exactly. But if Bennie stands in front of the garage and I tell Andrew to throw him a hundred shingles, I guarantee they'll all end up on your roof.

ANDERSEN: Added to the list all the same. Ok, we only need one more big ticket item. Did you come through for us, Urban?

OHIO STATE COACH URBAN MEYER: Well, we tried to. I had put together an all-expenses paid six night tour of Portugal and Spain - five star hotels, the works, really. But instead all I can offer you are these tickets to Jacksonville and half off a room at a Holiday Inn Express.

ANDERSEN: I don't understand. What happened?

MEYER: My travel agent is a fuck-up. 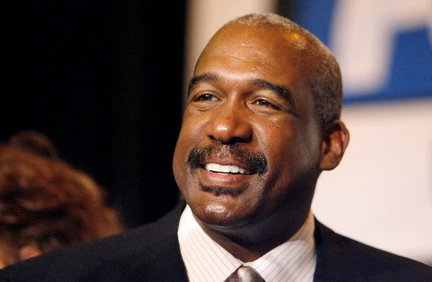