DOOM. This Week in Schadenfreude is usually amazing, but godDAMN, Cal. That's a new bottom. 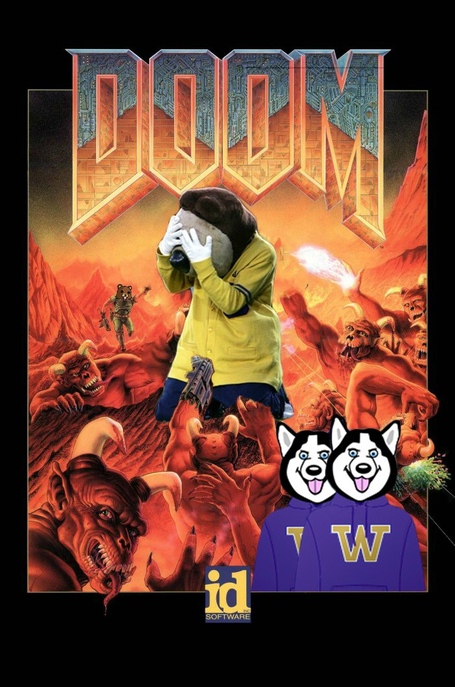 It may seem like there's no hope at this point in what has to be Jeff Tedford's final season, but there is this: Keenan Allen might be injured and unable to play for the Washington game because of a meaningless onside kick in the Oregon State game. That makes things worse, actually, but we said it simply "was," not that you would feel any better about it after reading it, Cal fan.

I KNOW THE WORDS I KNOW. Once/if he decides to retire, we would pay good money for a reality show called "Nick Saban interacts with the outside world."

On the Southeastern Conference coaches’ teleconference, I asked the Alabama football kingpin how he felt about being called a curmudgeon. I’d read it from another writer in reference to Saban about a month ago, and I’d thought it myself about Saban maybe 200 times prior to that.

"I don't know what that word means," Saban responded flatly.

The rest of the article details Nick Saban's terrifying interview protocols, something that totally explains why Nick Saban had Samantha Steele do her interview in ridealong fashion because there is no time for any of this shit, ever. (The interview where he admitted to forgetting his birthday.)

WE'RE SURE JIM MORA ISN'T ACTUALLY SAYING I WAS RIIIIIIIIIIGHT OUT LOUD. No wait he probably is because he's Jim Mora.

CATLAAAAAAAAAAB. Notre Dame gets the prairie LSD treatment. Spoiler: there are old people.

LES MILES CONTINUES TO CONFUSE THE LINE BETWEEN GENIUS AND IDIOT. If he lets Jordan Jefferson talk to his team and they beat Alabama, then we take back what we are about to say: WHAT THE HELL DOES JORDAN JEFFERSON HAVE TO SAY ABOUT BEATING ANYTHING IN THE PAST YEAR HE JUST LOST TO A FENCE.

THAT'S ACTUALLY SORT OF WHAT WE THOUGHT. The 30 for 30 Ghosts of Ole Miss was both gripping and flawed, something the AV Club review gets at here. (Going two hours probably would have alleviated a lot of that, since it feels like they ran out of room fast in an hour.)

THERE IS NO WAY WE ARE PUTTING MONEY ON MEMPHIS. Even if numbers smarter than we'll ever be say we should.

PROFILES IN PROFITEROLES. Holly's got a superb profile of Fresno State's Phillip Thomas, the safety who quietly leads FBS in total interceptions.

NEVER TOO YOUNG TO RECRUIT. David Cutcliffe has gone too far with youth recruiting, we say. AN OUTRAGE, WE SAY.

ETC: This is a fine costume, sir. Your relatives must be terrifying, Tyron Smith. This is far, far too accurate for us to be comfortable with.