THE ALPHABETICAL THIS WEEK BELIEVES GUS MALZAHN IS PSYCHIC, AND THAT GARY PINKEL IS NOT HAVING FUN

The Alphabetical is up. Here are your bonus letters.

Alpha: Holy shit, it's The Entertainment. 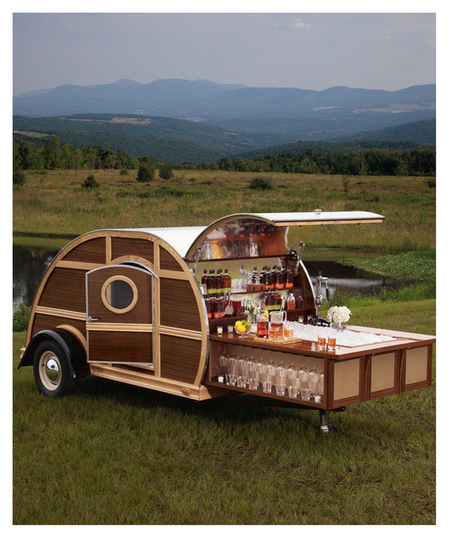 Neiman Marcus sells this trailer for $150,000 American, and this is what you get with it. .

Tailgating will never be the same now that your Bulleit Frontier Whiskey Woody-Tailgate Trailer is on the scene. Designed by interior designer Brad Ford, it’s impressive on the outside, but what’s on the inside truly astounds: sleek leather furnishings and details from Moore & Giles, rich wood finishings (handcrafted from reclaimed Bulleit Bourbon casks), elegant glassware, and a top-notch entertainment system, including a flat-screen TV, Blu-ray Disc™ player, and a state-of-the-art sound system, plus a one-year supply of Bulleit Bourbon and Bulleit Rye. Bulleit To Go, a second gift offered by Bulleit Frontier Whiskey, includes a limited-edition handcrafted flask, a bottle of Bulleit Bourbon signed by founder Tom Bulleit, and a leather-bound edition of The PDT Cocktail Book: The Complete Bartender’s Guide from the Celebrated Speakeasy.

We really thought about rolling Doug up in it, sliding him bourbon through the hatch, and just making sure he's breathing every few hours until someone announces Mark Richt's firing. There are questions--what exactly would one define as a year's supply of bourbon--but the answers outweigh the queries. We could all just climb in and live forever like we were all floating around inside John Malkovich's skull. (Also in the catalog: personal jetpack.)

Gamma: The other thing we really look forward to watching is Alabama in conference play, particularly in that stretch surrounding the LSU game. In 2009 they squeaked out the 12-10 game over Tennessee by the fat hand of Terrance Cody, and lost outright to LSU in The Game Of the Century Of The Fistfight Conducted With Broken Glass Taped To The Hands. Somewhere they will be tested, a fact we forget every year until it happens.

Delta: To a lesser but still curious degree, we want to see Mississippi State under pressure, as well, particularly Tyler Russell on the offensive side and the defense with a quarterback capable of real harm. They get that in Tyler Bray this weekend in the Tyler Bowl, but remember: the fun part about the kind of harm Bray can do is that you never know who's on the receiving end.

Zeta: We finally got Big Ten and Pac-12 networks this year, and that point where wants become needs? Both have crossed it. Viva tax deductions for work expenses! (Because we're never living without either ever again.)

Eta: Johnny Manziel may have 500 yards of offense by himself against La. Tech, and hoooboy is that something you want to watch happen.

Theta: Looking down the schedule, there is one probable win on the rest of Mizzou's slate: Kentucky. The rest, including a November 17th game against Syracuse, are either losses or tossups. Berks are indeed being stressed in Columbia in year one in the SEC.