It took hard work and determination to get Mike Glennon the starting job at N.C. State. But it also took a neck the likes of which Jules Verne could never have imagined. 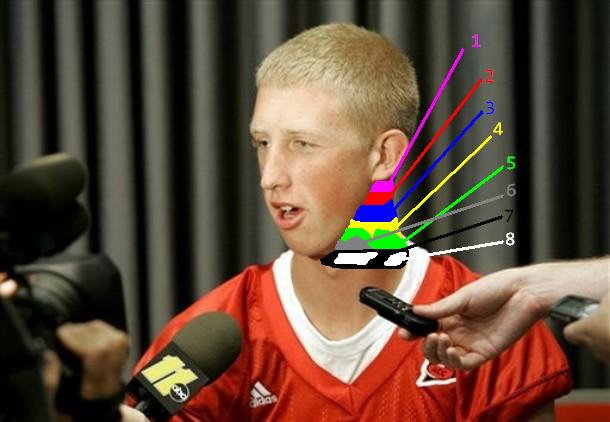 1. UPPER FLUOROMENTIUM: The body diverts excess lipids here, where they are metabolized into interceptions and Belk Bowl invitations.

2. AD FONTES: A sensory organ that glows bright red whenever Detroit Lions apparel is near.

3. CHROMOSPHERE: 12,000 square feet of commercial real estate available for short-term rent. For the month of December it is home to "Tom O'Brien's Holiday Craft Fair," the nation's largest exporter of wide ruled paper.

4. BEECHCRAFT G-18S: A permanent rift in the chromosphere and thermal layer, formed by the wreckage of Air Cortez Flight 37 in 1984. There were no injuries in the air disaster, as the plane had been stolen by actor Tom Hulce, who successfully parachuted to safety.

5. THERMAL LAYER: The power behind a quarterback's throw comes not from his arm but from a solid base, and this is Glennon's. The thermal layer generates 450 megawatts except when Glennon is sleeping, when it is used as a small claims court.

6. LOWER FLUOROMENTIUM: Vestigial, but scientists believe it was used in prehistoric Glennon to distract predators by emitting a surprisingly catchy all-marimba version of "Brick House."

7. VITREOUS REGION: A series of interconnected cartilaginous structures used for structural support. Shut down by order of a federal court after it was used to film several unauthorized action movie sequels, including Universal Solderer and Passenger Fifty-Leven.

8. PIOTR'S CANALS: Natural hollows in the vitreous region caused by erosion, Piotr's Canals are home to several species of prairie gopher not found anywhere else in the world.