THE NEXT ARKANSAS COACH IS CURRENTLY EMPLOYED

IT WOULD BE CRUEL TO SUGGEST TERRIFYING THINGS FOR ARKANSAS, AND WE WOULD NEVER DO THAT

Share All sharing options for: THE NEXT ARKANSAS COACH IS CURRENTLY EMPLOYED

Arkansas AD Jeff Long says Arkansas' next coach is currently employed at the college or pro level. This leaves so many horrifying possibilities for Arkansas fans, but it would be unfair to do that to an already traumatized fanbase recovering from both the Petrino Affair and the John L. Smith Experience. They don't deserve the pain, and to do so would be an act of cruelty--- 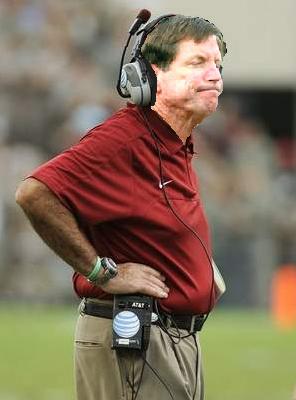 Available. Charismatic. Brings the pro touch to go with the college attitude, meaning that punt from the opponent's 35 will have all kinds of festive marching band music playing behind it. We asked every NFL announcer and coach what they thought of him, and they all agreed that he was simply one of the best in the business!*

*Also said about: Dick Jauron, Herm Edwards, Chan Gailey, Tony Sparano, Cam Cameron, Bruce Arians, Jack Del Rio, and a thousand other dudes most definitely not picking up a paycheck in the NFL!