THE CURIOUS INDEX IS COUNTING AND YOU ARE ALMOST LAST, COLORADO. ALMOST. 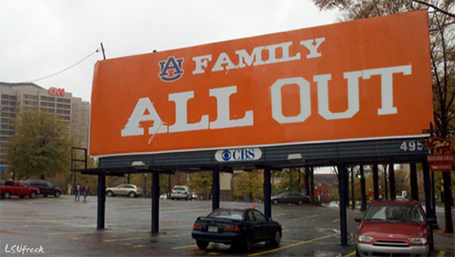 MIZZOU IS DOING QUALITY COMMUNITY OUTREACH. $7.600 at a Vegas strip club, to be fair, is like $7.60 anywhere else, but that's what you get for being stupid enough to go to a strip club that actually sits on the Vegas strip. No shame in the triple digit bill at Vince Young's steakhouse, though. Dude needs the business.

CHARLES ROBINSON IS YOUR FREELANCE BOUNTY HUNTER. The Atlantic continues their campaign to fix the NCAA, and since we like quixotic efforts we approve of the idea-- especially the part where they suggest the NCAA get out of the enforcement business altogether, and has Charles Robinson hang around schools like Max Fisher just waiting to drop down and knock a corrupt recruiter out with a gas grenade.

WE DON'T CONDONE BUT UNDERSTAND. Having the police intervene seems like you might have taken it a bit too far, but a mother who'll throw down in the stands for you seems like a mother either a.) worth having, or b.) one you have worn a fine groove in your eyelids rolling your eyes at over the years.

TENNESSEE'S STAFF SEEMS AFFORDABLE. The buyouts for Tennessee's coaching staff add up to somewhere just over nine million bucks total. This seems expensive until you remember that Kirk Ferentz's buyout is $452 million over the next 392 years, payable to descendants of Ferentz adjusted for inflation until said debt is relieved. An Outback Bowl win ten years ago over a Ron Zook Florida team was TOTALLY WORTH IT.

RELATED: This is what a fanbase sounds like when they are done, done, done.

NOT RELATED, BUT CONTAINS BORGES REFERENCES. Like the Argentine master, the Borges offense is a brief self-referential labyrinth from which you will never escape.

WHY THE LONG FACE, MACK? The hair, man. It's the hair. Though now that you look at it, Mack would make a fine Goth.

THE MATH CONFIRMS IT. Colorado is terrible, and this is not news, but we now have the data to marvel at precisely how crapulent they really are. 123 in F/+ is as bad as one can possibly football, statistically speaking, without actually being UMass.

ETC. MY NAME IS KIIIIIIIIIIIIIIIIIIIIIIIIIIIIIID. The Will Muschamp-o-lantern even has his glowing eyes! The Endzone Bar and Grill seems to be a place where you can get food and watch sports. Frank Beamer's diet secrets revealed.