A PRINCE GAVE YOU THE FUTURE, YOU INGRATES

Share All sharing options for: YOU'RE REGALLY WELCOME, KANSAS STATE

A. The wholesome and powerful Collin Klein is America's Heisman frontrunner. This is more true than ever now that Geno Smith has been possessed by the wandering spirit of John Brantley's 2011 season.

B. Kansas State is undefeated and stands a realistic chance of remaining undefeated and making a run at the BCS Title Game. Collin Klein and his performance at the quarterback position is unquestionably to credit for much of the team's success. 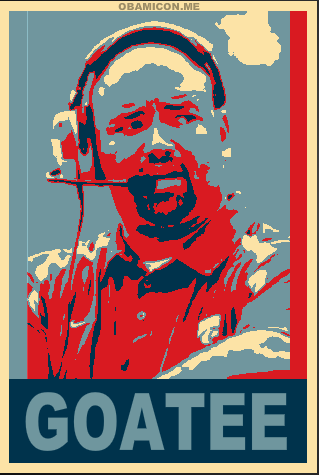 TREMBLE BEFORE ROYALTY, UNGRATEFUL K-STATE FANS, AND PRAISE HIS NAME AS YOU ENJOY THE FRUITS OF HIS GENIUS WHILE HE LABORS AWAY IN EXILE.

P.P.S. He also ran a pro-style system Klein would have been deeply uncomfortable playing in, thus eliminating much of what Klein has done so well as a rushing threat.

P.P.P.S And then there's the small issue of the "rest of the team," especially defense, but also the discipline K-State seems to play with under Snyder that they never had under Prince.

P.P.P.P.S. But damn your facts, especially when they're devastating to our case. SHOW YOUR RESPECT TO A PRINCE. (Via.)