We didn't want to go to the beach anyways.

FEARLESS LEADER IS IN JACKSONVILLE THIS WEEK. And we are not, but let's see if we can't do something to feel better about that? 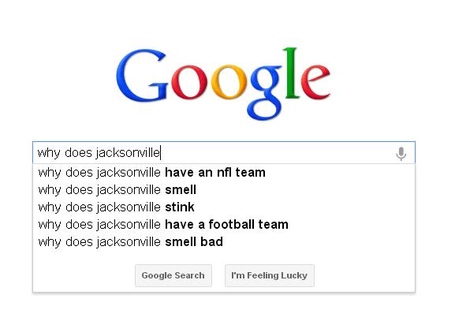 ENOUGH OF YOUR LIES, SIR. You can trot out your tired excuses about putting Florida atop your ballot because of resume and comparative opponent records and blah blah blah. There are only two possible reasons why you did this, Mr. "Journalist." The first? You are part of a vast Ohio-wide conspiracy to turn the Alabama fanbase against Nick Saban so he decides to leave Tuscaloosa and take the head coaching job with the Cleveland Browns. The second? BLINDED BY THE STRIPES.

INCORRECT, GEORGIA LINEBACKER JORDAN JENKINS. There was a higher power that determined the outcome of this game, but it wasn't the Abrahamic one. Kentucky lost, as it always does, because of Nenetooyah, the vengeful ghost of a Shawnee warrior who was slaughtered in the 18th century because he dared to ask if they could talk about something other than basketball recruiting for a change.

ONLY FOUR WINS TO GO. That's how close Jeff Tedford is to passing Al Groh on the all-time wins list and (checks schedule) (reads this) well shit.

IT'S A GREAT TACKLE. But this guy is lucky he didn't fumble the shirt. You can't be carrying it like a loaf of bread, buddy. WHERE IS THE DISCIPLINE IN THIS PROGRAM AL GOLDEN

ETC. How many times have you wished your house was more like a Golden Corral? PROBLEM SOLVED. This is yet another fantasy league where you should not draft Jay Cutler. Every movie should have Kung Fu RZA, especially if they make another Bridget Jones.