Breaking down South Carolina's murdernaut into his component pieces.

SP0RTSNUMB3RS takes a look at the finely-tuned bodies of football's greatest athletes and rips out their internal organs with its bare hands to sacrifice to our gods to help teach you just what makes the fastest and the strongest so fast and so strong. Today's subject: South Carolina defensive end Jadeveon Clowney. 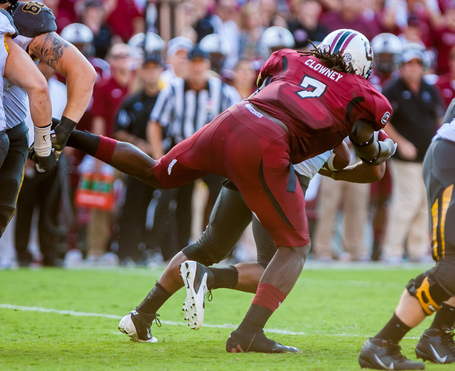 Whereas the normal human circulatory system pumps red and white blood cells, Clowney's veins and arteries contain pure Capri Sun Pacific Cooler, which keeps him refreshed and energized at all times. This is also why Clowney has a debilitating fear of straws.

A lightning-quick first step makes him a nightmare for offensive tackles, but it's his second step that actually gives Jadeveon Clowney his greatest advantage. That's when specially implanted speakers in his feet start playing the 1994 hit "Candy Rain." Blockers can't help but be distracted, mostly because rain covered in candy coating would be terrible for the water supply.

Clowney's dorso-lateral muscles are covered in a protective casing made from Lee Corso's dead skin. In most games, it has no net effect on pass or run defense, but it makes Clowney especially devastating against Kentucky, who relies entirely on the "ASK COACH" option.

This enchanted relic was forged in Hatwaret around 1270 B.C. and grants whoever possesses it the power to see into the souls of his enemies. Find out more this Sunday on TNT as Noah Wyle returns in THE LIBRARIAN: HUNT FOR THE PHARAOH'S EYE.

Blocking in the back is a penalty for a reason, people.

Handcrafted by some of Columbia's most talented artisans, Clowney's elbows have an old-world charm that look wonderful in any living room/running back's chest.

Spurrier sells them to local hardware stores. (NOTE: This is not like the time we said Stephen Garcia had shingles. Not at all like that time.)

Each of Clowney's hands takes six D-size batteries. They are not used for electrical power but, rather, for sheer weight, because it is extremely hard to stand tall in the pocket when you've just been Duracell'd. Especially useful at holiday time for forgetful dads.