THE CURIOUS INDEX FEELS THE FORCE

SIT DOWN, PADAWAN. It's nice to see a Jedi with some style for once. Most simply give the single move with no flair, but Kenjon Barner?

Oregon lost interest and focus once the backups went in, but being up 43-7 at the half has that effect on teams at all levels. Arizona State was likely losing this game from the start, so it's doubly cruel to lose star d-lineman Willie Sutton to a knee injury he sustained when he went knee-to-knee with an Oregon player on the first series. Knee joints are the Todd Graham of anatomical junctures: capable of doing good things, and also likely to go out at any minute.

BUT HEY MAN THE DESERT IS SO BEAUTIFUL AT NIGHT: 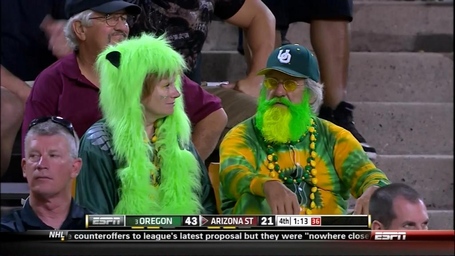 Greenbeard, your life secrets will be ours one day.

CAN FLORIDA STOP JADEVEON CLOWNEY? Yes, and it's just as simple as grabbing him. If you can grab Jadeveon Clowney, you are also probably a really, really good offensive lineman, had assistance from good playcalling designed to keep him away from the ball, and also got very, very lucky. These are obvious things, but that's the terrible part about preventing an excellent player from being excellent. The solutions are simple, and yet there he is pancaking your quarterback for the fourth time that game.

THE INTERNET'S NEXT MILLIONTH VICTORY. Ooh, look, just podcasting away out there free for your entertainment. The internet's chief skill is erasing Fridays, and Garnet and Black Attack is all too happy to help.

WEST VIRGINIA HAS BANJO HIP-HOP ON LOCKDOWN. The banjo sample really sells it.

LAFF RIOTIN'. The online Heisman at the halfway mark, as usual, goes to Twitter.

LE TAILGATE. It's the LSU edition of the Tailgate, meaning a slew of well-illustrated quality Les Miles jokes. Good Bull Hunting also talked about the game with ATVS, who is all too happy that the people responsible for cancelling the last TAMU/LSU series have all been shot and buried in unmarked graves. Mmm, horrible memories of Curley Hallman.

JERRY KILL WILL BE HAPPY TO KICK YOUR ASS. This is all very inspiring and cool, but please also don't overlook that in stating he's fine and living with a disorder many in Minnesota also deal with every day that Jerry Kill essentially offered to kick anyone's ass who wants it at the end of this radio clip.

IN OTHER ILLNESS NEWS. Mark Mangino's wife is recovering from cancer treatments, and wants him to get a job.

TROOPER TAYLOR GAMES, ETC. The master Shutdown Fullback stream for this week is here, and yes, features the best video game seconds away from towel-helicoptering its way to another school, Trooper Taylor.

ETC: Oh sure, we were looking for an excuse to never want to have sex again. Pierce Brosnan was clearly the sloppiest Bond, since leaving all those bodies around is a damned un-British thing to do.