OH MY GOD THEY CHANGED EVERYTHING OKAY THEY DIDN'T

Share All sharing options for: THE SEC SCHEDULE, REVIEWIFIED 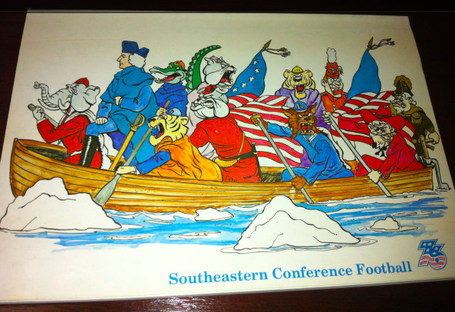 The 2013 SEC Schedule is out, and BURN EVERYTHING. That command has nothing to do with the SEC football schedule as it stands, since little changes. Let's review the schedules in summary by team and position on this really dangerous arrangement of animals and unstable personalities on a boat.

ALABAMA. Moderate road travel (at Miss State, Auburn) with one television-destroying inferno of a game on the road docket, a September 14 matchup with Texas A&M at the Hate Barn. Oh, and they obviously needed a more challenging schedule, so they got Kentucky added in to go with permanent Tennessee from the east. God hates you, Kentucky, and you know what you did to deserve it.*

*God is Bear Bryant. SURPRISE, everyone except Alabama fans.

The heavy, temperamental elephant is at the front of the boat, which is just some real SEC engineering right there.

ARKANSAS. Still missing the magical meth bowl with Missouri, pulls Florida and South Carolina out of the East, and three out of their four road games are generously described as "ass-prolapsing trauma waiting to happen." On the upside, second year coach John L. Smith will have the boys ready, we're sure.

Arkansas is not in the boat, since pigs were not invented until 1834, when John Ellington Bacon mated a donkey with a turkey and created the perfect meat of all perfect meats. They also did not enter the SEC until 1991.

We apologize but AHAHAHAHAHHAHAAHAHHAHAHHA OHOOHOHOHHOHOHOHOHO IT'S A GOD THING ALL IN WOOOOOO JUST REAL BLESSED TO HAVE ONE LIKELY WIN ON THE SCHEDULE. Hopefully new head coach Mike Shula can pull a few upsets on the way to five wins.

The Tiger is paddling at the side of the boat, presumably looking in the water for Pat Dye's pants.

FLORIDA. Huzzah! The SEC's debauched outlanders maintain their rivalry with LSU, and pull Auburn as their other West game. It's on the road, meaning despite a 24 point spread we will lose by a field goal only has to go to Mizzou, South Carolina, and Kentucky on the road. Not bad at all, really.

Florida is sitting in the back of the boat looking angry and not doing much, which is a pretty good summary of much of Florida football's history.

GEORGIA. Paying respects to Steve Spurrier needing to have a few Bulldogs suspended for that game, the USC matchup is moved back to its rightful place at the beginning of the year. The Bulldogs also keep the South's Oldest Rivalry with Auburn, and ensure an annual flash of the FIRE MARK RICHT meme by catching LSU early and likely in painful fashion.

Georgia is facing the wrong way, which is a pretty good summary of much of the state's total history.

KENTUCKY. Adds Alabama and Mississippi State, has to go to Georgia and South Carolina on the road, and on top of it all is allergic to all painkillers so nothing will ease or dull the agony.

Appears to be yelling at Vanderbilt in the picture, appropriate because yelling at anyone else would result in severe beatings.

LSU. Rivalry preserved with Florida, the Tigers get a road trip from the East and then have to go to Alabama. We are complicit in Les Miles' conspiracy of heavily managed expectations, and thus anticipate LSU struggling. (Les Miles will actually rebound to win ten games. This is what he does because he's superb on the rebound and horrible off the fast break.)

In the cartoon LSU appears to be staring at you, asshole, and wondering if you wanna fight. They're also drunk, but you probably assumed this already.

OLE MISS. A nice four game stretch of tough games at home helps, and two of your three road games are Auburn and Vandy. That's nice! The other one is Alabama, and that's the kind of trials you assume come from a loving god to make you better and stronger, Hugh Freeze. Pulling Vandy and Mizzou from the East is kindness, however.

Ole Miss is attempting aerobic exercise while smoking a cigar. This was customary for Mississippi fitness in the 1970s.

Mississippi State is wearing pink and barking at a flag, so we assume they're having a psychotic episode triggered by an allergic reaction to pesticides.

MIZZOU. The new guy gets coffee, has to do another year of the Poughkeepsie sales circuit, brings donuts in the morning, but does get Texas A&M in cold weather. So don't say there aren't perks to year one. (Like, for instance, not playing Alabama!)

Missouri is in the river in a car, cursing the day it ever let Gary Pinkel drive.

SOUTH CAROLINA. The Gamecocks are on the road for three straight games in October, and even if that is Arkansas, Mizzou, and Tennessee that still sucks. However, it is those three teams, and Florida comes to you.

South Carolina is in the ACC in this picture, which is the boat behind this one with all the people jumping in and out of it.

TENNESSEE. Auburn is the other draw from the SEC West, and that's gentle, but then comes the usual with Alabama and a road game at the Swamp. If Derek Dooley's coaching, this will likely be miserable, and if it's Jon Gruden then it will be miserable but fascinating. Did you know Tyler Bray, Justin Hunter, and Cordarrelle Patterson could all go pro this year? That's not on the schedule, but it should be.

Tennessee is not in this picture, but there is a very angry and lost Turkish soldier in his place towards the back.

TEXAS A&M. A tough finish with two road games at LSU and Mizzou to finish, but good on you for pulling Vandy and Mizzou out of the east. Gets Alabama at home for the aforementioned angry hive special, and goes to Arkansas in a game you might not want to let children watch because blood, blood, blood.

A&M is not in this picture, and that's good because whooping and hand signals would have spoiled the surprise and woken up the Hessians in a hurry.

VANDERBILT. This is...brutal? That's a word, since Vandy has to go to Florida, South Carolina, and A&M. On the upside, they keep Tennessee on the schedule.

Vanderbilt is working the rudder because a gentleman does not callous his hands.

OOH THE TALKY TALK! And bedhead, just, like, epic bedhead: