Somewhere off the coast of North Carolina, NORTH TEXAS COACH DAN MCCARNEY and LOUISIANA LAFAYETTE COACH MARK HUDSPETH sweat and strain as they row a dinghy against the force of the Atlantic. Hours of work have left them weary, but they have reached their destination - the forbidden shores of Demon Deacon Island.
MCCARNEY: So what do we do now? The letter just said to pull up on the beach, but it doesn't look like anyone else is here.
HUDSPETH: They have to be here. Why would someone just tell us to row to an abandoned island for no reason? 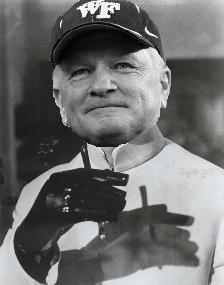 WAKE FOREST HEAD COACH DOCTOR JIMGROBE: Indeed, that would be uncivilized! Welcome, welcome, gentlemen. I'm simply delighted you were able to make it. My apologies for the crude transport, but the...authorities are always trying to shut down my research here.

DR. JIMGROBE: Oh, there will be plenty of time to discuss that. But come! You must both be tired and hungry.
(He leads them off to one of the island's bungalows, where they quickly fall asleep. They awaken, however, deep within the recesses of Demon Deacon Island.)

DR. JIMGROBE: Trouble? When Alexander Fleming discovered penicillin, was that trouble? Did they call it "trouble" when the first successful organ transplant took place in 1954? Far from it! No, what you are about to become a part of is medical history - along with my other creations.

HUDSPETH: What other creations?

DR. JIMGROBE: Behold! I have taken GEORGIA COACH MARK RICHT and CLEMSON COACH DABO SWINNEY and combined their forms into the Disappointopotamus! 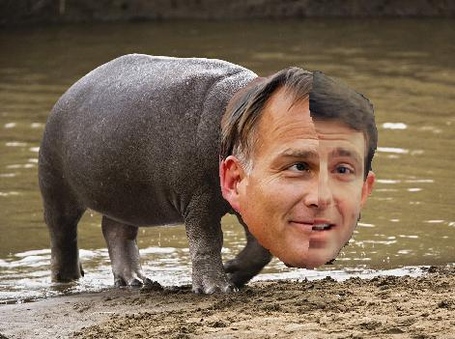 A juggernaut of a beast, capable of laying waste to anything in its path between the months of August and mid-October! Its only weakness are the cold and expectations. Such flawless, terrifying beauty, wrought by my own hands! Then, I created the union of PENN STATE COACH BILL O'BRIEN and NORTH CAROLINA STATE COACH TOM O'BRIEN Two Toebriened Sloth! 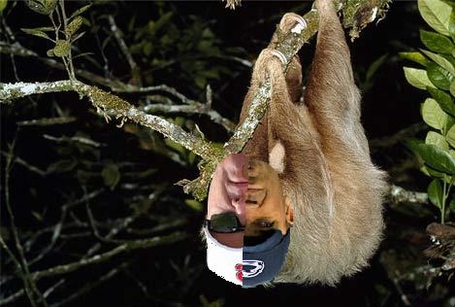 Observe as it lulls its prey to sleep with clock control offense and boring press conferences! Shuffling and shambling its way to six or seven wins, no more, no less. It exemplifies the perfect balance of Nature, keeping its metabolism so low that it only needs to consume one awkward quarterback a year.

MCCARNEY: You're a madman, Jimgrobe!

DR. JIMGROBE: Many geniuses have been called as much by the weak-minded. But it is brilliance, not madness, that took the sad, shabby forms of SOUTH FLORIDA COACH SKIP HOLTZ and MARSHALL COACH DOC HOLLIDAY and created the Albaturtle! 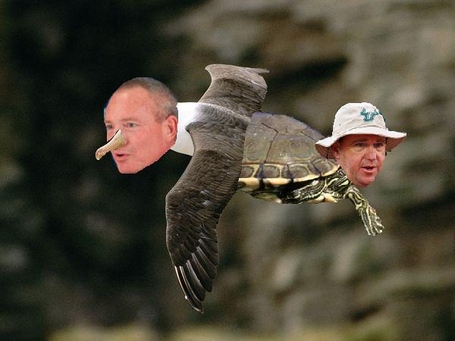 Actually, I don't know what it does or why I made that.

HUDSPETH: What is it you think these abominations can possibly accomplish?

DR. JIMGROBE: Genetic perfection! Take NEBRASKA COACH BO PELINI and GEORGIA TECH COACH PAUL JOHNSON. The former is a chaotic ball of untempered rage and burst capillaries, while the latter is so emotionally deadened that he wraps birthday presents with photos from the My Lai massacre. But when we combine the two... 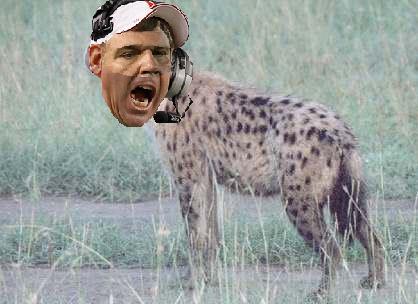 ...the result is the Drowsy Hyena! All of Pelini's bluster and Johnson's stoicism! There have, of course, been some failures along the way. But UMASS COACH CHARLEY MOLNAR and NEW MEXICO STATE COACH DEWAYNE WALKER died for science. 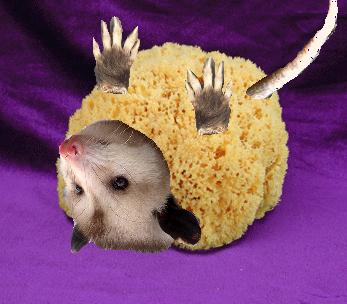 MCCARNEY: So what do you intend to do with us?

DR. JIMGROBE: I have great plans for you. The surgery will be long and arduous, but when you wake up, you will have shed your human husks and become the Mean Green Cajun Manatee! It will be my greatest accomplishment since Frigantelope Bird, the fusion of OREGON COACH CHIP KELLY and ARIZONA COACH RICH RODRIGUEZ! 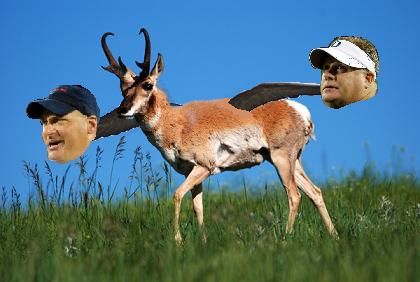 KELLY: Too bad you forgot to disable my Nike One-Shot Laser Eye, Doctor.

KELLY: Now hop on, fellas. We're getting the hell out of here.

HUDSPETH: What the hell is he singing?

KELLY: He's really into Bublé lately. It's killing me.

(They fly off as the Drowsy Hyena begins to eat the Albaturtle.)