THAT'S FUNNY BECAUSE THERE ARE PEOPLE ON GOOGLE PLUS IN THIS COMMERCIAL. The perfect example of a commercial where you smile, applaud the ingenuity of the product, and then continue to never use it again.

IN OTHER BRILLIANT USES OF SOCIAL MEDIA. 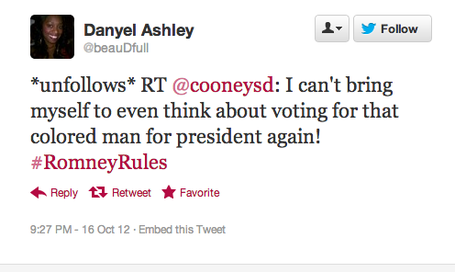 That's a trainer for West Virginia who deleted his Twitter account last night after the "retweet in an aghast fashion" function of Twitter allowed it to escape to the rest of the internet. West Virginia has had no comment on it thus far, but yes, the word "colored" probably isn't the first choice of words here, or anywhere since dammit, jaundiced green/yellow is a color. #TeamNaturallyJaundicedWhiteGuys

GREEN AND MEAN, INDEED. UNT pulled the upset over U-La-La last night in Denton, and this happened, and when a running back makes eight men miss on a single play from scrimmage, it is not your night and you should just leave Texas as soon as possible.

SOMETIMES NOT SCORING IS THE BEST KIND OF PLAY. It is in this case, for sure.

YOU SHOULD STOP SAYING THINGS WITH YOUR MOUTH. It's probably technically true that Marcus Lattimore has lost a step due to his injury last year. It's also true that if you tie a kettle bell to a lion's tail that he's going to be a step slower, and will still be a goddamn lion who is faster than you and happy to devour things. Things like you. Stop saying things, Josh Evans. Stop saying them right now.

MINNESOTA IS HONEST AND READY WITH THE CHECKBOOK. The Gophers are going to pay $800K not to play UNC because they have decided that after years of denial and scheduling the USCs of the world that they are in fact the Minnesota Gophers, and have no business playing anyone they know they cannot beat. 1997 Bill Snyder nods thoughtfully, and offers you a lollipop of congratulations.

MAKING OF A QUARTERBACK. How Matt Stafford went from being another dude with a big arm and floppy hair to being an NFL starter with lots of money and piles of women (who still went 2-1 against Florida.)

HAHHAHA CHARLIE WEIS GETTING CREATIVE. There's another world where Charlie Weis went into medicine and became a plastic surgeon, and in that world there are a lot of people who look like this. Two quarterbacks will start this weekend! That's TWO quarterbacks! AH-AH-AH!!!! [counts gigantic salary people cannot stop throwing at him]

ETC: Paul Pasqualone is everywhere this election season. Wizznutzz, never, ever change. You can never have enough terms for bustin' ass. The merriest and most confused bus in Scotland. John Calipari is better at everything than you are.