Please remind the coroner's office about this column when they find toxic amounts of Big Ten in my system.

Such was the wreck of the Texasus,
Unable to run or to throw!
Christ save us all from a death like this,
On the reef of Mike Stoops's Woe!

Look, Kentucky, I'm getting sick of this. I go to all this Microsoft Paint trouble to put a Wildcats car flag on a cartoon dinosaur's tail and you can't even win the Tetanus Spike once? Yes, a Spike Factor of 42% (17/40) against Arkansas is pretty awful, but I want to see you challenge the 60% ceiling. Do it for Joker, because you're sure as shit not doing anything else for him.

Florida's Spike Factor for Week 7 was 29% (16/54). That's all I have to say on the matter of the Vanderbilt game, which was NEVER CLOSE DO YOU HEAR ME VICTORY WAS ALWAYS ASSURED. (Go here if you want to see the other data we've tabulated so far.)

SCIENCE IS WHAT MAKES US STRONG

HYPOTHESIS: Terrible teams will tend to have higher Spike Factors than good or even mediocre teams

(This project won third place in the 2012 International Ace of Base Science Fair, narrowly losing out to Papier-Mache Volcano That Wants Another Baby and Which Color Road Sign Best Opens Up Eyes?)

We have previously discussed the phenomenon in which a team wins the game despite having the higher Spike Factor. It is, to be sure, uncommon and ill-advised, and it usually requires the losing team's offense to be terrible in ways the Spike Factor doesn't capture. (PLEASE SKIP TO THE NEXT PARAGRAPH IF YOU DON'T WANT TO READ ABOUT BIG TEN FOOTBALL.) Take, for instance, Michigan State, who forced Iowa into a nearly 50% number in the first half (14/29). The offense thanked the Spartan defense by only taking a 10-3 lead into the locker room, then letting the Hawkeyes hang around all day before Mark Weisman tied the game with a minute left. Two field goals and some Andrew Maxwelling were all it took at that point for Michigan State to lose despite having the lower Spike Factor for the game (25/70 for 35% to Iowa's 29/69 for 42%).

Did you skip straight here? Someone is a smart reader. Let's talk about the real horrorshow victory last Saturday - Maryland over Virginia. Maryland won this game despite the fact that only four of its fourteen drives went for more than five plays. Maryland won this game with only thirteen snaps in the second half that gained yardage. Maryland WON A GAME WITH A SPIKE FACTOR OF FIFTY-FIVE PERCENT. So congratulations on your comparatively successful 42% rating, Virginia. I'm pretty sure the Italian army is going to win the Coastal Division at this rate. 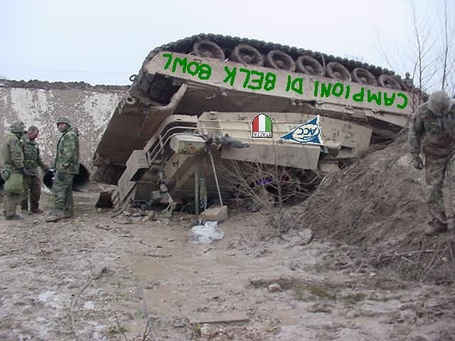 ONE RICH-ASS RUNNER UP

51%, Texas. That's what 31/60 against Oklahoma works out to. The drive sheet from this game has more threes than Mark Mangino's score sheet at the Olympic diving trials.

THE TETANUS SPIKE THAT WASN'T THERE

We present this week's award to the Purdue Boilermakers, who sputtered and coughed their way to a Spike Factor of 52% (31/59) against Wisconsin. Of particular importance to this achievement were the first four possessions after halftime, in which the offense advanced the ball on four out of twelve plays. Purdue Football 2012: Because Somebody Has To Lose To Indiana!