THE CURIOUS INDEX PONDERS THE MYSTERIES OF SOUTH CAROLINA

NEVER DIE, AMAZING ROOSTER PAINTING. It's never really hate week with South Carolina, but instead a kind of five day meditation on "What is South Carolina," and then "Why is South Carolina?" Then we all just stare at this painting and, in lieu of understanding, arrive at an awestruck appreciation. 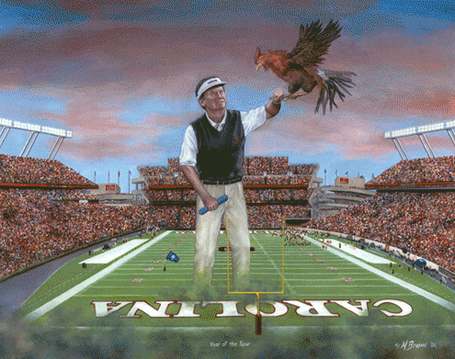 MAN WHO CARES WHAT MACK WARBOG THINKS. Mike Wilbon was talking about college football, but no one cares unless he was wearing finery that impressed the dandies of the city, who all beheld is magnificence and said "Forsooth! Invite that man among our lofty parties, and reserve a sainted spot upon the grass for him at the estates!" Mike Wilbon is the Mr. Collins of sports, and wealthy people of sport are his Lady Catherine De Bourgh.

THAT CERTAINLY WON'T MATTER. Not having your leading running back against Alabama can't possibly matter. We mean that, since it's not like you're running on them anyway. The only hope for Tennessee is Tyler Bray throwing the ball 83 times, and then running four draws for 148 yards and one TD. BRING BACK THE SLUSH FUND, MAN. (via.)

THE HEBREW HAMMER IS ON THE SHELF. Mark Weisman will not start against Penn State this weekend, ruining the dreams of 14 slightly athletic Jewish chlidren in the Midwest who will now have to rely on old tapes of Jay Fiedler for inspiration.

THE URGE TO HEDGE REMAINS STRONG. You only have numbers at this point with Notre Dame, and those numbers are very impressive indeed, and yet all that can float into your brain and still crash against the wall of "oh my god I am not falling for another Notre Dame fan that will get annihilated in a bowl game by real competition again."

THEY SUPPOSED TO BE ACC AND YES YES THEY ARE. Apologizing for football player misoconduct is the most ACC thing ever, and officially the least SEC thing ever.

ETC. "Hey, man, Patrick Swayze's banging your wife! Again!" No, no, no, no, and noooooo. You won't like Madea when she's angry.