SOMETIMES YOU FIND WINNING RAGE IN THE STRANGEST PLACES

THIS IS AWFUL AND IT IS WORKING

Share All sharing options for: SOMETIMES YOU FIND WINNING RAGE IN THE STRANGEST PLACES

Hi. Remember me? I surfaced from the murky depths of the internet, traceable to an intentionally made promotional video the University of Oklahoma probably spent money on, and then deliberately released into the content water table. Everyone who watched it developed some form of brain cancer, and lawsuits are pending.

As with any toxic substance introduced into the environment, the unintended consequences of exposure were not uniformly harmful. Consider this: while merely viewing this video will shrivel the reproductive organs and cause spontaneous and fatal blood clotting in the brain in normal humans, the Sooner football team has displayed entirely opposite reactions to Cakey McFitted and his tween anthem to Soonerdom.

Prior to its release, the Sooners suffered a loss to Kansas State, underwhelmed at UTEP, and seemed to be on track for a disgraceful nine win season. You people are too hard on Stoops, but whatever: radio standard nine game spoilage for Sooners fans, most likely with a tepidly satisfying victory over Texas upcoming in Dallas, blah blah bored football aristocracy blah.

Then the video was released, and then BY GOD KING HE STIFFARMED A MAN WHILE HURDLING A MAN. 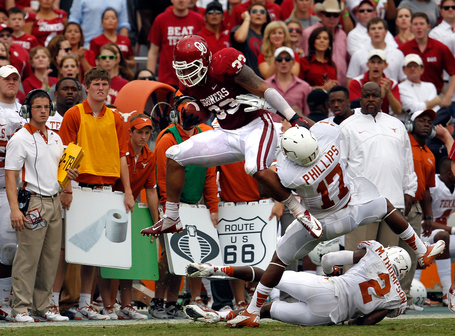 Even Jim Ross had to strain his hyperbole flexors trying to capture the exact ferocity employed by Oklahoma in kicking Texas' ass cheeks off their bodies and somewhere into orbit. When your cable goes out in a week, blame an errant piece of Mack Brown's buttocks for the interruption, and know that it's cool, you're only keeping seventy households from their Longhorn Network. (Broadcast feed of the LHN live, as it has been for the past 48 hours: just this.)

Freakbass of the Prairie, your methods are appalling, but we can't dispute the results. whether it's healthy or not, the Sooners appear to feed off of tweencore dipshits in fitteds, and evidence backs us up on this point. Whatever you do, Sooners, embrace the cheese and even perhaps double down on it. Have that dude sit on Bob Stoops' shoulders the whole game if necessary, perhaps while performing live, and then watch as your football team lays waste to all it surveys. Place glitter on the OU logo, and take the field in fingerless gloves.

It's different than what Texas is doing in many ways. For instance, it appears to be working, and that's way different than anything the Longhorns are doing at the moment.