VANDY'S BEEN TORMENTING THAT TREE FOR A LONG TIME

Relevant Kanye: "It All Falls Down."

1. They still have that giant magnolia tree at one end of the stadium at Vanderbilt, something most schools would have razed to the ground in the name of seating. The word quaint sounds patronizing, but please don't think it is: that tree's shade covered the fence where my dad used to sneak peeks at Alabama when they came to town. There is legitimate emotion tied to the word in this case. It is quaint, and lends its own personality to an otherwise featureless stadium.

2. We hope trees don't have emotions or memories. If so, that tree is a bitter, twisted soul from the years of shitty football it has been forced to watch. It probably craves death at this point, but continues to live thanks to the indifference of the heavens and a lack of arms or legs to do the job. 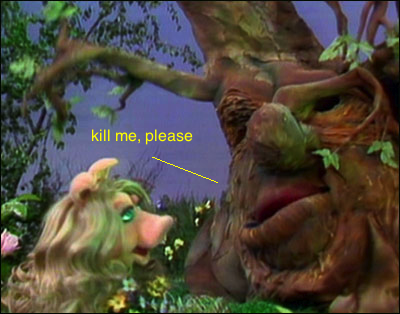 3. Yet very rogue moon's eve or so, Vanderbilt will waltz up and drop a brick on your skull, and even if they don't beat you you come away shaken, disturbed, and questioning the order of the universe itself. Like PCP or ketamine, Vanderbilt football really isn't made to make anyone feel good: it's there just to disrupt and disturb, and then serve a dim, upsetting memory later in the season. Remember that time we did Vanderbilt in October on a Saturday night? And you ended up breaking Tim Tebow's single game rushing record? Yeah, let's never do that again, dude.

4. So if the question is "How is James Franklin any different from Derek Dooley?", then the answer is "because James Franklin coaches at Vanderbilt, and Derek Dooley coaches at Tennessee." That is not a fair answer to either, but it is the answer. Both have to this point relied on moral victories and bluster on the recruiting trail for food, and both are capable of seducing a room full of sportswriters in mere seconds.

5. For the record: this is not hard, since sportswriters are emotional whores looking for a reason to fall in love, and then stage the stormy breakup they will inevitably blast all over facebook and your texts. The first time it's a crisis, and the sixth time it gets blocked and unfollowed with an eyeroll. Sportswriters, in general, are everyone's worst exes all the time.

6. If the difference between a 42% winning percentage (Franklin) and a 47% total (Dooley) excites you, we salute your ability to argue marginal stupidities in famine conditions. It still doesn't describe their different situations, or how Dooley is now three years into a tanking rebuild at Tennessee, and how the expectations for him will always be higher thanks to Tennessee's glorious past and hypothetically competitive future.

7. If you'd asked us two years ago which job would be harder given school, circumstances, roster, and potential ceiling, we would have answered in the direction of Vanderbilt. Yet after watching Derek Dooley lose coaches, recruits, and a pile of games, one of these things is true: either the Tennessee job is way, way harder than anyone imagined, or Derek Dooley is very good at making things as difficult as possible, especially for himself.

8. We're leaning toward the latter. James Franklin, on the other hand, had his team at 24-17 within one score in the second half, and you can't really ask for much more as a second year head coach at Vanderbilt than that. It should have been 24-21, actually, were it not for Zac Stacy dropping a TD thrown right in his hands by Jordan Rodgers, and thereafter should have been closer if Florida had not whipped out the full zone read just in time to baffle an entire defense at once.

9. That zone read saved Florida's ass down the stretch, since the Commodores flooded Gillislee's run lanes to an absurd degree and left whole alleys of Vandy's defense unoccupied. It worked nicely on Gillislee, who ended the evening with 67 rushing yards. Meanwhile, Jeff Driskel averaged 16 yards a carry and broke Rhino Jesus' single game rushing record. The zone read's a pretty neat thing, especially when Brent Pease is unafraid to pop it out of several different formations with quality sales jobs done by Gillislee.

10. Driskel also had 77 passing yards, which is unimpressive, but won the game, which is impressive and trumps unimpressive. Will Muschamp ain't winnin' no beauty contests, but this is basically a Paul Johnson team with a great defense at this point. Did you know your fingers can sweat? They can, and did right as we typed this.

11. As for that defense, they had a solid night up front, particularly linebacker Antonio Morrison, who had six solo tackles, two assists, and did much of that working against the underrated Vandy running back Zac Stacy. Omar Hunter also had a large night with two tackles for loss and a lot of marauding bear-ness. These are the nice things to say about the night.

12. The bad thing to say is that Matt Elam's periodic moments of being totally rabid spread to Louchiez Purifoy and Marcus Roberson. All three played like they had no fewer than twenty angry bees in their helmets all night, and not in the good way, but in the bad swatting-at-everything-and-crashing-into-stuff way. Muschamp called it a sloppy night in the secondary, and with reason: Jordan Matthews had 131 yards on eight catches along with a TD. He's very good at his job, but so are the people in the Florida secondary when they're not undergoing one of their spells of misdirected aggression. (Saturday night's lasted around two hours, minimum.)

13. So that's Vanderbilt, a game on everyone's schedule that's as much a warning to others as a football program, and the one conference team you might plausibly call your team's favorite mistake. An unbalanced, sloppy effort at any point in the schedule might as well fall here where no one can see it, where you can remember that it all falls down without proper diligence, and that even with that it might all fall down anyway.