HAIRCUT SWITCHING WORKS IN ALL FORMATS

A HAIRLESS FRANK BEAMER IS THE SADDEST THING YOU WILL EVER SEE.

Share All sharing options for: HAIRCUT SWITCHING WORKS IN ALL FORMATS

If the rest of the internet is doing it, Freek can do it better. This week's best matchups are not here because it turns out a lot of the best coaches have precisely the same haircuts, so you get these instead.

Homeless Frank Beamer is the saddest thing ever created. David Cutcliffe, meanwhile, was going bald, and decided to do something about it. Then he jumped into a pool, emerged with his hair unmussed, and then was immediately assaulted by five women half his age.

We not gay or anything, man, but Al Golden is just beautiful with the tousled hair, like Adonis if he ran a rental car place by the airport in Miami. (Which Al Golden does.) That's a belief you might feel uncomfortable voicing at New Voices Faith Covenant Church Community And Faith Center, but Pastor Fedora isn't going to judge (out loud, anyway.)

Hugh Freeze's hair color has no impact whatsoever on his demeanor. In contrast, change Gene Chizik's hair color and catch him at the right angle, and suddenly he's eight bong hits deep and looking for a bag of Flamin' Hots to watch HGTV with for the afternoon. 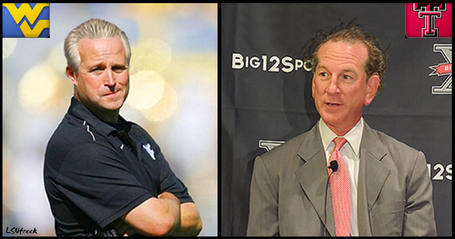 Put any head of hair on Dana Holgorsen and he turns into just another avatar of Holgo, but man, misplace one hair on Tommy Tuberville's head and he turns into a file photo of a physicist killed in a Manhattan Project criticality experiment.

Les Miles, assistant principal at every middle school you ever attended. Spurrier just looks even more redneck and alpha-crackery, which yes, is possible.