THE CURIOUS INDEX DEMANDS THE DEBATE OUR COUNTRY NEEDS

THE DEBATE FOR OUR NATION'S SOUL. 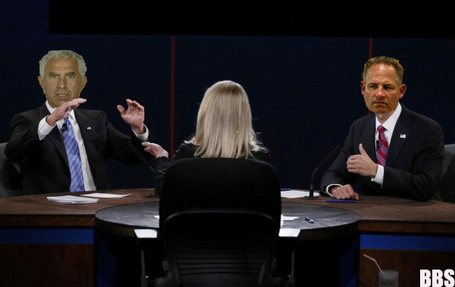 Les would be pretty great at debate, actually, since saying nothing in a lot of words can take you pretty far in life.

DISGUSTING AND UNACCEPTABLE. Florida university boards of trustees are always delightfully vocal and unpredictable--remember FSU's going rogue in about five seconds over realignment?--but even the usual madness can't totally discount a USF BOT member saying the current state of USF football was "disgusting" and "unacceptable." Skip Holtz is the PT Cruiser of coaches. We don't know what this means, but it just fits.

HAS A CLEMSON FAN ALREADY ACCUSED SOMEONE OF AN ANTI-CLEMSON MEDIA CONSPIRACY? If you had "First comment" in the pool, collect your winnings and head to the window, because that's how long it took for someone to do that under Godfrey's fine piece on the ongoing drama of the Robert Nkemdiche recruitment and his brother's development at Ole Miss. How dare someone write down quotes and publish them, aka oh my god you do not even understand how language works you peasants and we hope Robert Nkemdiche flips the whole world's coffee table over and takes up handball in Croatia.

AND NOW THEY ARE ONE. The most interesting thing to happen in the UTEP/Tulsa game? SOMEONE GOT THE GRAVITY GUN OUT AND STARTED DOING REALLY DUMB THINGS WITH IT.

HUMANITY ADVANCED ADVANCED. Jadeveon Clowney is the kind of player who makes opponents wonder not about their chances for winning, but about whether evolution itself has already passed them by.

SO SHUTDOWN FULLBACK AND LHN ARE ABOUT THE SAME SIZE, AUDIENCE-WISE.

We don't doubt the science of this at all. Hook 'em, you brave few.

ETC: Jim Lehrer has this shit on lockdown. This is what it's like to crash in a bus off a 30 foot cliff, a process that for the lead singer of Baroness included rebreaking his own arm. Clearly a novice at the art of cooking squirrel.