Some weekends of college football are must-see because of matchups between ranked teams or games with major conference-title implications. Then there are the ones with potential for major rubbernecking opportunity — not good games, necessarily, but the kinds of games that make you say "Oh my god I can't believe I'm watching this train wreck BUT I CAN'T TURN AWAY." Week 7 might be both. Strap on your seatbelts, keep your hands at 10 and 2, and just keep driving, that Grand Cherokee in the right-hand lane will go flying onto the roof of that Corvette any minute now. (All times EDT, as usual.)

What you'll be watching: Arizona State at Colorado (ESPN, 9 p.m.)

What you should be watching instead: Western Kentucky at Troy (ESPNU, 7:30 p.m.)

Did you immediately click on those Twitter links to the video of the police-chase subject blowing his head off live on Fox? Do you have an entire folder on your Windows desktop labeled "Budd Dwyer"? Then you are the perfect audience for Arizona State-Colorado. If, on the other hand, you're a normal person whose blood doesn't immediately rush south at the prospect of extreme pain or suffering, stay away from anything Colorado-related this season. Instead, watch an actually competitive, maybe even fun, Sunbeast game on the U and just flip to the vice-presidential debate if you start losing interest. No, seriously: You know at some point Joe Biden's going to call Paul Ryan "ace," "champ," "slugger" or "sport," and you'll feel sad tomorrow if everyone's talking about it and you didn't get to see it firsthand.

What you'll be watching: Navy at Central Michigan (ESPN2, 8 p.m.)
Thanks a shitload, baseball. Because of you, the time slots that might ordinarily get a wild Mountain West upset or another crazed field-rush by Ute Nation have been snapped up, and instead we're stuck with Battle of the Teams That Might've Been Dark-Horse BCS Busters in 2009 But Now Just Make Us Sad. No me gusta.

What you'll be watching: Oklahoma vs. Texas, Dallas (ABC, noon)Sure, this is the most high-profile matchup of the hour, and for good reason, but be honest with yourself: Given this series' history, aren't you kind of worried in the back of your mind that one team or the other is going to completely soil itself in the first quarter and render the game a snoozeworthy blowout? Should that happen, feel free to tune in to . . .

What you should be watching instead: Auburn at Ole Miss (SEC Network, 12:21 p.m.)John L. Smith wisely passed the videocassette along to Gene Chizik and now Auburn is the SEC's official Most Gawkable Hot Mess. OH MY GOD RUN KIEHL FRAZIER IS COMING OUT OF THE TV.

What you'll be watching: Stanford at Notre Dame (NBC, 3:30 p.m.)Power rushing attacks, strong defenses, no downfield passing threats whatsoever, a final score of like 10-7: These are the kinds of things that make pop RILL FOOTBALL boners amongst both old-school Irish fans and, apparently, Nick Saban. The rest of us, though? Bored to tears about halfway through.

What you should be watching instead: West Virginia at Texas Tech (ABC/ESPN, 3:30 p.m.)We now have enough evidence to state with confidence that any game involving West Virginia in 2012 is going to involve shipping containers full of points. C-17 cargo planes may be called upon to fly emergency point shipments into Lubbock to sate Dana Holgorsen's rapacious desire for scoring. What happens when he collides with Tommy Tuberville, a man who would've hung up his spurs completely after being fired from Auburn but for the fact that he still hasn't realized his dream of coaching a game to a 0-0 tie at the end of regulation? Don't have a fricking clue, except that it should be awesome. The thrill of discovery! I imagine this is what the first guy who ever put Mentos in a 2-liter of Coke felt like.

What you'll be watching: South Carolina at LSU (ESPN, 8 p.m.)

What you should be watching instead: Texas A&M vs. Louisiana Tech, Shreveport (ESPNU, 9:15 p.m.)I'm not actually suggesting you blow off what should be an intense battle between two ranked SEC teams in Death Valley to watch an SEC-vs.-mid-major matchup rescheduled from Week 1. As a Georgia fan, though, seeing Steve Spurrier back at the helm of a juggernaut still stings a little — particularly if he manages to go down to BR and pull off a big road win, a sensation I've more or less forgotten, much like "sobriety" or "happiness." Anyway, this is the game Queen Stabby will be at, and weird stuff always seems to go down in these rescheduled games, so I'll be watching this. And you're welcome to join me, you know, if you want to and I'm not too much of a downer or anything like that. 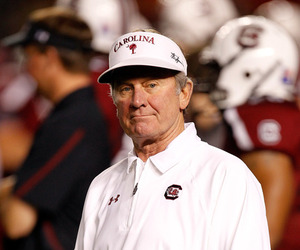 What you'll be watching: California at Washington State (Pac-12 Network, 10:30 p.m.)Cal is primed for a hangover after their big win over UCLA. Mike Leach is desperate to claim a Pac-12 scalp, and the Tedfordbot 3000, incapable as it is of either feeling or sensing human emotion, seems particularly vulnerable.