George Lucas is ruining everything, including the Big Ten.

THIS IS MAJOR TOM TO GROUND CONTROL, I'M STEPPING THROUGH THE DOOR. 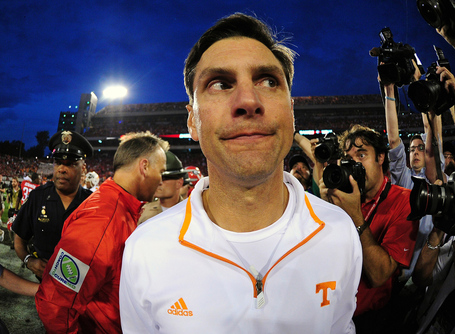 And I'm losing in the most peculiar way
Scored forty-four and lost on Saturday
My greatest blessing is still my greatest curse - Tyler BRAAAAAAAAAAAAAY!

PAT NARDUZZI HAS TO RETURN SOME VIDEOTAPES. The real crime here is not what the Ohio State staff took out of the game film it sent to the Spartans, but, rather, what they inserted. I don't care if kids love Jar-Jar Binks - he's a terrible character, and there's no way he had four sacks against UCF. QUIT MESSING WITH THE CLASSICS, URBAN. On the plus side, this is still better than the film Wisconsin gives its opponents, which always has a "PREVIOUSLY VIEWED - ADULTS ONLY" sticker on it.

GEORGIA CONTINUES ITS STREAK OF THE DAD-EST RECRUITING VIOLATIONS. Mike Bobo is grounded for a month after providing impermissible benefits to a recruit and his mother. The benefits in question? Free admission to the NCAA Tennis Championships. Todd Grantham will one-up him by taking a recruit to Home Depot for the better part of a Saturday during the quiet period.

THE CHAIR WILL RECOGNIZE THE SHIRTLESS SENATOR FROM ARKANSAS. We could have experienced three or more decades of Barry Switzer, U.S. Statesman, had it not been for that asshole Frank Broyles. Somebody please write this alternate timeline. Make sure you include the part where Senator Switzer breaks Boris Yeltsin's arm in a Turkish bath.

FOOTBALL, THE LAND OF INNOVATION. What do we have to thank for the switch away from goal posts on the goal line? Steak lunch, that's what. Don't listen to doctors that say "why are you eating steak for every lunch are you insane." They are jealous of your burgeoning genius and cannot handle threats to their intellect.

ETC. When Aunt Stabby enslaves us all and forces us to build the pyramid where she will be entombed, this is what we will fill it with. D'GLESTER HARDUNKICHUD. I don't care how much this is - you should buy it, and you should wear it on job interviews.