BEFORE ANYTHING ELSE YOU HEATHENS. Please review these important materials on the most crucial of our bowl season's not-at-all-meaningless-exhibitions, the GoDaddy Bowl in Mobile, Alabama. You should find within them a report of victory despite Chandler Harnish suffering some kind of ankle injury in the first half, but no mentions of the surreal site of the Belles watching half the game lined up in pastel dresses behind the players' bench. They sort of looked oddly intimidating, as if they were itching to get in the game. If they had, this would have marked the first time a player in a hoop dress had taken a college football field since Barry Switzer sent Billy Sims out to score in the 1979 Nebraska game. (Barry always was a pioneer.)

There was also this. 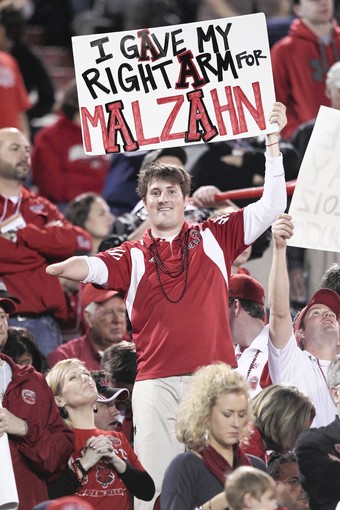 And of course TigerDroppings is already on the case.

OH AND THAT THING. We weren't just wandering Bourbon Street at two in the morning for nothing. New Orleans has been occupied from the Channel to the Marigny and across all riverbanks by a swarm of football fans, desperate, drunken, stumbling, bead-whoring football fans. The Saints/LSU confluence has been pretty impressive---and while all LSU fans are possible Saints fans, not all Saints fans are LSU fans---but yes, if this town were a baby, it would be one with Fetal Alcohol Syndrome. All of this is happening, too, including Harvey Updyke wandering the Quarter as a free man with his own catchphrase on his back.

FORMAL NEWSY TYPE STORIES. The wagers are on, and seriously we are so disappointed neither Governor has done what they really want to do and wagered prisoners on the game. (We did see a shirt that said "Angola: A Gated Community" at the Saints game, and now sort of want it in this very conflicted way, because LOL Life Sentence In Prison.") Josh Dworaczyk's story is a cool one, especially the big about translating Greg Studarawa into English for his teammates over a headset. (G-Stud: "WHAARGHGLBABALLGBLLWLELEL." Dworaczyk: "Slide right to adjust, he says.")

We swear we'll try to score, y'all. Oh, and this got said in that very article by Darius Hanks.

He also expects to spearhead Alabama’s passing game because he feels he can beat All-American cornerbacks Morris Claiborne and Tyrann Mathieu.

"I definitely feel like those guys, they can’t cover me," he said.

And experience says this is completely inaccurate certainly backs this up! DAMN YOU ALABAMA-BIASED AUTOCORRECT. They're going to put the game up on the side of a goddamned building. You are all mad, utterly, and completely mad.

AND IN OTHER SAD COACHING NEWS. We've been scrambling, but in the utter shitshow that is the Penn State hire, there is the consolation that the staff is looking pretty good.