Today a very special guest joins us to preview the Orange Bowl: Chili, late of Block-C, the gone-but-not-forgotten Clemson football blog and Willy Korn Evangelical Church. Chili is currently occupied in his job of being the fourth largest human being in Shanghai, but did have time to crank out this expat review of tonight's unique mix of combustible football variables mixed with too much information about his cat's reproductive system.

There are things you should know about the Discover Orange Bowl, and I will tell them to you now in this post. Most of this will be about Clemson because I do not know or care about West Virginia.

DABO & HOLGO. It’s not a flamboyant Swedish acrobatic duo it’s a pair of young and energetic fortysomething head coaches making their BCS debut. Dana Holgorsen is 9-3 in his first season with West Virginia and is a student of some Mike Leach and Hal Mumme, among others. Dabo Swinney is 29-18 through 3 ½ years as head coach and is known for his folksy charm and is more excitable than a cat in heat. My cat is in heat now, so this is especially poignant to me.


OFFENSIVE MAGNIFICENCE, DEFENSIVE MALAISE. The main reason anyone outside of these teams’ respective fanbases will want to tune into this game is the promise of a high-scoring SHOOTOUT. West Virginia is running up around 17th nationwide in offense while Clemson has rewritten their offensive record book (fairly easy, it’s all on Lotus Notes. Yes, Lotus Notes. They got a deal on it, okay?) under the nation’s highest paid assistant coach, Chad Morris. Geno Smith is the guy you need to know for the Mountaineers, while wunderkind Sammy Watkins has garnered a mountain of media coverage this year.

As for defense, I must say I’m at a loss. Upon doing research for this game I have come to the conclusion that the defenses will not be in attendance for the Orange Bowl. I am just assuming they will instead be substituted with posters listing each corresponding offensive player’s greatest fear. Mountaineer QB Smith will have to tackle his crippling fear of commitment, while Clemson WR Nuk Hopkins has reportedly been gravely concerned with facing his childhood neighbor’s developmentally disabled Alaskan Malamute, Drankenstein.

CLEMSON’S ORANGE BOWL HISTORY. In the 1952 Orange Bowl, Frank Howard’s Clemson Tigers defeated the Miami Hurricanes. In 1982 Howard was enshrined in the Orange Bowl Hall of Fame as Danny Ford’s Tigers captured the national title by defeating the Nebraska Cornhuskers 22-15. Another 30 years pass and Danny Ford joins the HOF while the Tigers once again compete for the Orange Bowl. The Bowl Committee can go ahead and stitch Dabo’s name on the side of the HOF orange sack or whatever for 2041, where the jarred head of Danny Ford mounted on a John Deere frame will lead the Tigers into the Bank of China Orange Bowl. Mark it. Done.

CEREAL. I enjoy a nice Big Gulp cup full of Fruity Pebbles. I fill the cup and then hamfist them down to compact them before filling up said Big Gulp once more. Add milk and you have yourself a stomach anchor to keep you firmly moored on the couch and not drifting off into the dangerous world of socializing with humans. You’ll thank me later, probably via Reddit.

THE LOST ART OF CORRESPONDENCE IS ALIVE AND WELL IN WEST VIRGINIA. Not long after the bowl matchup was set, an enterprising Mountaineer fan penned a letter to Clemson. Well, they did as close as a West Virginian could do to writing a letter and included newspaper clippings of West Virginia players with captions written over them in Sharpie. Under a WVU roster we are informed that "THIS IS A REAL FOOTBALL TEAM," while an image of a punter was followed by that of their kicker with"YOUR SPECIAL TEAMS WON’T HELP!" scrawled on it. Look, jabs aside, I can only applaud this person for kicker shit talk. 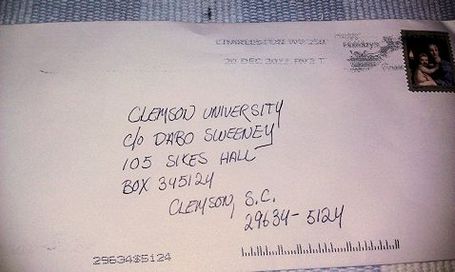 CHARLESTON SOUTH CAROLINA IS BEST CHARLESTON. I have often seen West Virginians get miffed when someone is speaking of Charleston and doesn’t specify whether they mean the one in South Carolina or the one in West Virginia. Here’s a handy tip to tell the difference: NOBODY EVER TALKS ABOUT VISITING CHARLESTON WEST VIRGINIA EVER. Well, outside of an arraignment.

TWO DOLLAR BILLS VS BURNING COUCHES. Clemson fans are known to bring paw-stamped two dollar bills with them on road trips to visually demonstrate spending power to host cities. West Virginia fans are known for burning one of their many spare porch-couches after victories. Winner in Miami: two dollar bills. 8Ball the Tiger’s got the hookup, and you can snort Peruvian flake through a two dollar bill just as well as you can any other form of legal tender, but don’t even think about burning this couch, it’s Armani Casa.

PART WHERE I END THE POST. Clemson is favored by 3. I couldn’t understand this Clemson team in a thousand lifetimes, but I’ll take them ATS here. (They will now lose)

Chili may be found at his Twitter feed, where he watches insane Chinese tv so you don't have to, or at his SBN page.