MARIO CRISTOBAL: AN EDSBS FACT SHEET WITH A DRAMATIC INTERRUPTION

Share All sharing options for: MARIO CRISTOBAL: AN EDSBS FACT SHEET WITH A DRAMATIC INTERRUPTION

As you can see, we were writing a profile of Rutgers' new coach Mario Cristobal, and then something happened. 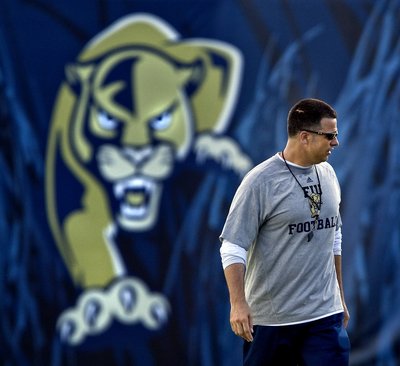 This 10 feet tall cartoon panther came to life and made an attempt on Coach Cristobal's life just after midnight one late Summer practice. A cartoon has never come to life since.

School: University of Miami [makes "U" sign in all directions]

College Career. An excellent lineman during his time at the U, Cristobal was tutored by the U's legendary line coach Art Kehoe in the fine arts of holding without holding, subtle leg whips, and making love without being in love. ("Honey, I love this, but not you.") Could sue Duane Johnson for copyright infringement for basing "The Rock" on Cristobal's entire demeanor and persona, but Cristobal considers his life to be the superior work. Those that do not recognize that instantly are beneath consideration.

His tie is: Currently on your mother's floor. She has needs, you know.

Summary: HAHAHHAHA DOESN'T MATTER BECAUSE HE'S NOT COMING TO RUTGERS.

It's really hard not to be watching Downton Abbey and watch this unfold without thinking: "Rutgers! The wagging tongues of London have spoken your name! Get a husband, and get one now, love be damned!"